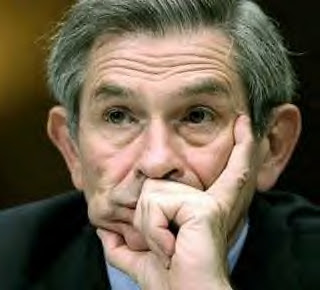 How could you have forgotten the Wolfowitz saga? The man who was not fit to head that wonderfully pure and clean institution, the World Bank?

We followed it quite carefully. Here is the beginning and the comparison with the Verheugen tale, which ended quite differently in that Verheugen, despite breaking every rule of his employment and, indeed, cheating on his wife, retained his job.

Here is the tale of African representatives wanting Wolfowitz to stay as he was beginning to clean out the Augean stables, that is the World Bank.

A link to Tobias Buck's blog in the FT that points out the differences between the Verheugen and the Wolfowitz sagas (having started this tale with the similarities above). Just to remind our readers:

The main differences had to do with the fact that Mr Verheugen was secretive about the affair, had actually promoted the lady to be his chef du cabinet, is a married man and has not had to resign. Otherwise, it is all the same.

We did have a piece about Mr Wolfowitz's successor, Robert Zoellick with some doubts whether he was quite what those purer than the snow tranzis were looking for.

We have, however, left the story alone for some time. Thankfully, Thomas Lifson and Clarice Feldman on American Thinker are made of sterner stuff. Mr Lifson has linked to the Wall Street Journal article, which is, sadly, available only on subscription, that has taken the trouble to find out what the result of that investigation into Mr Wolfowitz's behaviour was.

Following a call from us, a bank spokesman says the investigation has been completed, and that the report finds "no basis to conclude misconduct occurred." The tab for this fishing expedition? The bank won't say, and Goodmans didn't return our calls. But a source estimates the cost to the bank runs north of $500,000.

That figure may be pocket change at the bank, though it is hardly so for the poor people whom the bank ostensibly exists to serve.

Mr Lifson calls it disgraceful. Really? I call it par for the course. After all, the main purpose was served and Mr Wolfowitz was removed from a position where he might have shaken the World Bank up.

Meanwhile, Reuters reports that Britain has become the top donor to the World Bank. In fact, the amount of money the World Bank under the emollient Robert Zoellick is garnering continues to rise. The question is, what good will come of it all. Let us hope that all those people who are rejoicing now will be just as keen on giving an account of how the money was spent when it does its usual disappearing act.

In the circumstances, I believe, it behoves this blog to adopt the World Bank as yet another organization whose goings on must be followed as closely as possible.
Posted by Helen at 20:19