Sarko is having a bad time (sort of) - Part II 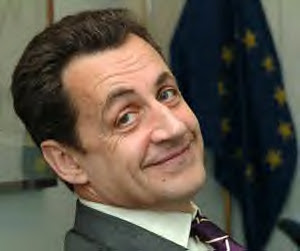 One of our readers has already indicated some pointers to the Sarko in Euroland story as a follow-up to this. Let’s say, Sarko is having an up-and-down time.

First the good news. It would seem that he and Chancellor Merkel are at one in their assessment of Iran as a continuing threat, despite the latest US intelligence report, which said that the previous intelligence report was completely wrong.

During their joint press conference on December 6 Merkel indicated though did not say it out openly that she was no longer worried about Sarkozy’s plans for a Club Med, as it has been termed by the media.

One of the fault-lines of the European Union is the division between member states that look towards the Mediterranean and those that do not. The latter are also divided into more Atlanticist and more Continental minded countries. Germany, tends to be Continental-minded despite Merkel’s continuing mild pro-Americanism. Her relatively tough stance on Russia and Putin, which does not extend to changing Germany’s growing dependence on Russian gas, is part of that Continental attitude: the former Communist states are Germany’s natural allies (and no, I don’t want to hear any rubbish about it being a continuation of lebensraum – as it happens there is a great deal of difference between Angela Merkel and Adolf Hitler or Kaiser Bill).

French politicians had always recognized this and tried to stall EU’s enlargement to the east as long as possible, arguing that political links should be forged with the non-EU Mediterranean countries. Naturally enough, those political links would not extend to reforming the trade policies or CAP but in Sarko’s case, they do include signing an agreement with Algeria to give that country civil nuclear technology.

The deal, covering power generation and applications of nuclear technology in agriculture, biology and water resources, must first be endorsed by the European Union.

The details of the deal were lost in the row over Sarko talking about the evils of colonialism but refusing to apologize for the French version of it or acknowledge that there might have been the odd problem or two about the Algerian War.

Back home he did refer to the war in order to praise the harkis, Algerians who fought on the French side and were then left to the mercies of the new regime after the French withdrew. Belatedly, their sacrifices are being acknowledged but this does not necessarily please other Algerians any more than Sarko’s firm anti-immigration stand does.

Apparently there will be a streamlining of visa rules for visits and President Sarkozy talked of the need for young people from the two countries to learn from each other.

Algerian commentators say political ties remain hostage to the past, a subject dear to the current Algerian leadership, most of whom took part in the struggle against France.

Don’t know about that. The War was over 45 years ago. What many of them took part in is the fall-out afterwards when erstwhile comrades turned on each other in quite a nasty fashion.

Even that was rather a long time ago. As for President Abdelaziz Bouteflika’s supposed record as a freedom fighter, it has far too many unexplained gaps. I can believe, however, that memories of that very nasty conflict die hard on all sides.

On the whole, Sarkozy seems to have achieved what he wanted, which is to proclaim the need for a special Mediterranean regional agreement that would, undoubtedly, be led by France. The EU is not happy as Deutsche Welle explains and that is not necessarily what the man wants unless he can avoid future repercussions. We shall see what happens when the Algerian deal is discussed in real earnest.

Sarkozy wants to create an economic, political and cultural union of Mediterranean rim states and invited those interested in participating to a summit in June. But many European Union countries have expressed opposition to the idea, which they see as competition for the bloc's so-called Barcelona process, which aims to increase ties between the EU and Mediterranean states.

It was Angela Merkel who expressed that opposition most clearly. (The lady is given to expressing views fairly clearly as seen from her statement about Zimbabwe during the benighted and completely pointless EU-Africa Summit. On the other hand, she did attend it unlike the heads of government of Britain, Lithuania, the Czech Republic, Hungary, Slovakia and Cyprus.)

Speaking at a conference in Berlin Wednesday, Merkel attacked Sarkozy's vision for an association of Mediterranean nations as being "very dangerous." The German chancellor used unusually harsh language to warn the French president against splitting the very core of the European Union with his vision of a Paris-led alternative union -- and one from which Germany would be excluded.

Merkel said she was highly skeptical of Sarkozy's plans and insisted that any cooperation with the EU's neighbors must include all EU member states. Otherwise, she warned, Germany could, for example, form an Eastern European Union with Ukraine and other countries. These types of developments would threaten the cohesion and unity of the EU, she said. She warned that allowing a separate association with access to the EU coffers could lead to a "corrosion of the EU in its core area" and release "explosive forces in the EU that I would not like to see."

"One thing has to be clear," she said. "Northern Europeans also share responsibility for the Mediterranean, just as the future of the borders with Russia and Ukraine is an issue that concerns those living on the Mediterranean."

Actually, she is wrong in that assessment. The reason is it impossible to create a common foreign policy, that long-cherished aim of the European Union, is precisely because these various cross-concerns do not exist. 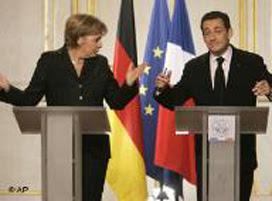 There is also the suspicion that by “creating” this Mediterranean Union that would stretch from Morocco to Turkey, Sarkozy hopes to defuse the problem of the latter country’s application to the EU.
Having had a frank and open discussion with Sarko, Merkel has moderated her expressions:

On Thursday, however, she qualified those comments, saying it would be unacceptable for the different parts of Europe to orient themselves in another direction. It would be a "difficult test" for the EU, if a second union were to be established, she added.

It seems extraordinary that there are people in Britain who still think either approvingly or disapprovingly that this country is the greatest obstacle EU integration faces.
Posted by Helen at 22:32