We have only ourselves to blame 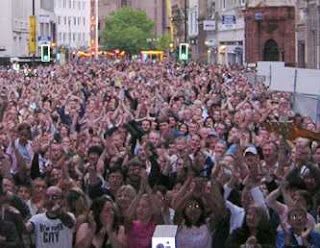 Hannan tells us today in The Daily Telegraph that, "We deserve whatever Europe throws at us". In his piece, ruminating on Brown's imminent betrayal as he slinks off to sign the Lisbon treaty, he makes the more general point that:

Eurocrats no longer tell themselves that, once people see the benefits, they will come round. Now, like the rulers of the Iron Curtain states, they demand acquiescence rather than approval, consent rather than consensus. They don't hope to convince us, simply to bore us into surrender.

And, by and large, they are succeeding. Whether through apathy, fatalism or sheer indifference, we are letting our leaders trample all over us. There are plenty of people we might try to blame: mendacious politicians, trivia-obsessed journalists, Eurocrats.

But the truth is that responsibility lies closer to home. If we had properly wanted to prevent tomorrow's grisly necromancy, we would have roused ourselves. The fault, dear Brutus, is not in our stars, but in ourselves, that we are underlings.

In many senses, the man is right – we have said us much on this bog, and reinforced that message in the forum. We have only ourselves to blame – we, after all – albeit as a collective - voted for the very people who got us into this mess. Furthermore, although there is a muted outrage at Brown's refusal to give us a referendum, it will be domestic issues rather than his breach of trust that will cost him the next election.

In my earlier days, when I was active in UKIP, the answer seemed so obvious. All people had to do was put their cross against our party in the ballot box, sending a clear message to our rulers that we would not put up with this leaching of power to the nascent supreme government in Brussels, and the problem would be sorted.

It was the same with the Referendum Party under Jimmy Goldsmith, but the mood of the moment was to get rid of a corrupt and dysfunctional Conservative Party. That took precedence over everything else, a mood which swept Tony Blair into power and a further wave of European integration.

But the fact is that, while a small, vocal rump of us have continued to rail against the steady leaching of the power of our nation to Brussels, without leadership from one of the two major political parties – and since it was never going to be Labour, it had to be the Conservatives – the anti-EU movement was never really going to go anywhere.

To that effect, while it is a generally accepted axiom that there are no bad troops, only bad officers, the failure of the Eurosceptic movement (and how else can it be described?) has to be attributed mainly to the lack of leadership. As long as the Conservative Party consigned the issue to the "too difficult" box and refused to put the EU at the centre of its agenda, trying to keep it on the agenda was always going to be an uphill struggle. 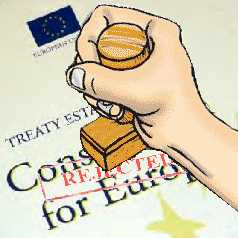 Even now, the absence of that leadership is still manifest. After (of if – hope springs eternal) the Lisbon treaty comes into force, Cameron will have to come to terms with the fact that we will no longer be able to change our government. If he gets elected and becomes prime minister, we will automatically become a member of the European Council, the Cabinet of our supreme government – exactly the same government to which Gordon Brown will have belonged.

If there was any honesty in politics (not that there is), the name of the general election would be changed to "general reshuffle" and then at least we would know what was happening.

The fact is, though, that it suits our political classes to keep hold of the pretence that they are still in charge, although their ambitions of power have now largely been replaced by a lust for the trappings of power. But, as their ambitions are sated, they care not for the welfare and independence of our nation – simply that they should be at the top table.

When we are faced with a political élite and its serried ranks of hangers-on who resolutely refuse to confront what is staring them in the face – and who promulgate the pretence that "Brussels" is something "over there" and does not really matter - what would Hannan have us do?

We personally cannot do more than we are doing. Politics, we believe, is about ideas. In a democracy, it is about winning the intellectual arguments, and hence we rehearse those argument endlessly on this blog, attracting a pitifully small, albeit steadily growing audience. Would he have us parading in the streets? Would we fill more than a telephone kiosk, if we can find one?

But, of course, Hannan is right – damn him! Collectively, it is down to us. There is a very simple answer. We simply refuse to vote for any Party unless or until it commits to withdrawing us from the EU and restoring our nation to its rightful owners – the people. If enough people do not care about that, though, and continue to vote the monkeys into power, then we – as a collective – only have ourselves to blame.

So, Mr Hannan, are you going to vote Conservative at the next election?