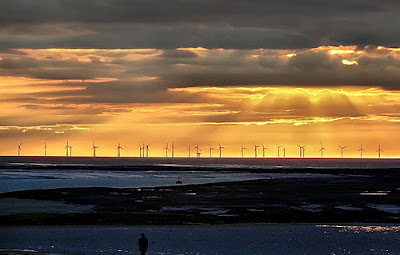 Despite advice from their own civil servants that it is simply unachievable, it looks like this mad government is set to go for the EU target of 20 percent renewable energy supply by 2020.

This is from Business Secretary John Hutton who is telling us that every household in Britain could be powered by off-shore wind farms, with up to 7,000 turbines installed around the UK's coastline.

At the moment, a mere two percent of Britain's power comes from renewables – and much of that from landfill methane, with providing less than 1 gigawatt. But the government is now looking for around 34 gigawatts - which using current technology would mean introducing some 7,000 turbines.

Asked whether having a wind installation every half-mile around the coast was acceptable, Mr Hutton replied: "It is going to change our coastline, yes for sure. There's no way of making the shift to low carbon technology without making a change and that change being visible to people."

The worst of it though is that this madcap idea simply cannot work. With an average load factor of around 35 percent, alternative generation capacity will have to be built for the two-thirds of the time when the wind farms are producing no electricity at all – at ruinous cost.

But an even bigger problem is that, when highly variable wind power approaches ten percent of total production, it risks destabilising the grid, precipitating total collapse of the system.

Furthermore, in the highly corrosive maritime atmosphere, equipment is expected to last far less than its land-based equivalents, increasing downtime and costs dramatically.

And all this to deal with the miasma of global warming – a fantasy of our ruling classes which defies logic. The vision, therefore, is of a world gone mad – to which these cathedrals of insanity will bear witness.