The BBC has learned 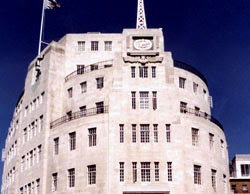 "The European Commission is giving millions of pounds of taxpayers' money to environmental campaigners to run lobbying operations in Brussels, the BBC has learned. Among the organisations to benefit is Friends of the Earth Europe (FoE), which received almost half of its funding from the EU in 2007."

Yeah, right! The BBC has learned - as revealed by this blog on 18 July, run by Booker on 22 July and then picked up by The Telegraph on 18 August. Nice to see the BBC catching up at last, but do they really have to be such self-regarding prats?

As for Simon Cox, the star of Radio 4's The Investigation, the gifted staff of which so diligently researched the programme, he tells us that:

Siim Kallas, a vice president of the Commission in charge of the EU's anti-fraud operations, told Radio 4's The Investigation he had been assured this funding was not taking place. He said: "The European Commission is not financing anybody to lobby ourselves - nobody is supported just for being there."

The funny thing is that the producer of the programme appears to have got the idea from Tim Worstall’s blog who, in turn, got it from here.

But if the producer had followed the link that Tim provided, to the original piece on this blog, he would have found that the information about the EU financing lobbyists like Friends of the Earth Europe came from, er … Siim Kallas.

Leaving aside this open goal, further into the programme, we are told that the EU finance initiative was about promoting the "Plan D" for democracy – which is rather odd, because the EU has been financing Green lobbyists for many years before “Plan D” was even thought of.

So much has been said of the BBC bias in EU affairs but the alternative is much more prosaic and more plausible – simple incompetence, of which this programme is a classic example. Even when they are given the information on a plate, they still can't get it right.