Why are they surprised? 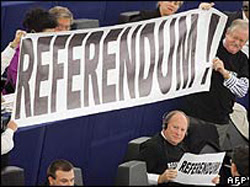 Labour MEP Michael Cashman was amongst those squawking about a demonstration today in the EU parliament during a "ceremony" marking the signing of the charter of fundamental rights.

Complaining that the MEPs who took part in the protest were behaving like little children, we even went to the trouble of producing a press release which stormed, "These examples of bully boy tactics have no place in Britain, in Europe or in politics. Their actions have brought shame and ridicule on the United Kingdom… they should be thoroughly ashamed of themselves."

Not content with that, the egregious Cashman went on to say, "Their views represent an extremist minority on the fringe of Europe. This is the true reason as to why they have to resort to kicking and screaming like spoilt children or worse."

The action which attracted his wrath was provoked by a speech from Portuguese prime minister Jose Socrates, currently holding the EU presidency, who called the signature of the document "one of the most important events of my political career … a fundamental date in the history of Europe". Eurosceptic MEPs wearing black t-shirts with a white "referendum" sign on them, jeered and booed, brandishing banners in protest and delaying and interrupting the premier's speech several times.

After calling on them to let their "guest" speak, the parliament's president angrily asked them to leave the hemicycle. The protesters stayed however, and after the Portuguese prime minister's speech, they booed the commission president as well.

The protest was actually initiated by the Group of the European United Left - Nordic Green Left (GUE/NGL), which does not view itself as Eurosceptic but which wanted referendums on the treaty but it was joined enthusiastically UKIP MEPs led by Nigel Farage. The Services immediately turned off the television coverage of the incident, leading Farage to comment that, "This is the new EU in action, showing the world a united face as they steam-roll towards their own super-state while totally refusing to allow anyone to see a different point of view."

The president of the EU parliament Hans-Gert Pöttering called the scene an "unfortunate sideshow", one that had UK Labour MEP Arlene McCarthy sniffing that "Waving banners demanding a referendum is a pointless exercise". Others took more direct action and one member of the European People's Party (to which the Conservatives still belong) dragged a female observer from the Independence and Democracy Group out of the chamber and demanded her camera, which showed footage of the protest.

So far, none of that footage has appeared but the BBC managed to cover the event for posterity (top left), which shows Roger Helmer holding one of the banners. And, childish though the "colleagues" might have thought it, when they treat their own peoples which such contempt, they should not be at all surprised when their hubris provokes the only natural – and necessary – response.

Daniel Hannan also has a go.