A profound and dangerous development 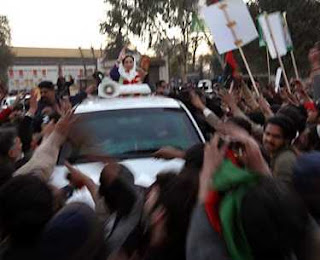 All agencies are reporting that Pakistan opposition leader Benazir Bhutto has been assassinated in a suicide attack that also killed at least 20 others at a campaign rally in Rawalpindi.

A party security adviser is reported by AP as saying Bhutto was shot in neck and chest as she got into her vehicle to leave the rally. The gunman then blew himself up. There is a full report, with pics, on the Daily Mail site.

Iain Dale perhaps reflects our view, declaring, "I make no pretence of understanding the ins and outs of Pakistani politics", while the commentariat on Conservative Home have been quick to wade in with a variety of opinions.

Michelle Malkin, however, is conveying reports that al Q'aeda are claiming responsibility for the assassination, while the Independent is retailing comment from Riaz Malik, of the opposition Pakistan Movement for Justice party (Pakistan Tehreek-e-Insaf). He is warning that, "The impact will be that Pakistan is in more turmoil - it will be the start of civil war in Pakistan."

In this global village of ours, this is an event we cannot afford to ignore – whether we understand the politics or not. Pakistan's president Pervez Musharraf is held as a major ally of the West in the war against terrorism, and Bhutto was slated as being an even tougher opponent of the Jihadis.

The porosity of the border with Afghanistan has already made dealing with the insurgency there much more difficult and major instability in Pakistan can only make bringing peace to Afghanistan even more perilous. Not least, the Afghan National Army will be increasingly drawn into guarding its own borders – and perhaps engaging with Pakistani forces – reducing its efforts in securing internal stability.

Not only that, our main logistic lines, supporting our troops in Afghanistan, are routed through Pakistan.

With probably over a million Pakistani immigrants in this country, there is also a strong domestic dimension. There are justified fears that violence in Pakistan might spill over into the streets of Bradford, Coventry and other major British towns and cities, or that perceived wrongs to Pakistan will visit the sort of action meted out to Benazir Bhutto.

Either way, the assassination of Bhutto is a profound and dangerous development, and one from which no good can come.