...when Gordon Brown slinks off to Brussels to sign a treaty no one wants, few understand and for which most demand a referendum – which we will not get. In the absence of any voice, we are left to make the same sort of childish gestures that were made in the toy parliament yesterday (below).

In the real parliament the day before, others put it more eloquently, even if the net effect was the same. Of note was Richard Shepherd, veteran of Maastricht, who made one of the most moving speeches in the entire sequence of the debates on that treaty. Now he says:

There was a joy, in that at the last election all three parties promised that the people should be invited - no, not invited, but should be given the right, which we would express by law - to take part in a referendum on this treaty. … Labour's 2005 election manifesto promised this:

"We will put it" - the European Union constitution - "to the British people in a referendum and campaign whole-heartedly for a 'Yes' vote".

That was the undertaking given by the Labour party - the Labour Government, in fact - and the then Prime Minister made clear not only that the British people would have their say on the EU constitution, but that if the constitution were rejected he would not sign up to what was simply an amended version. At the time he said:

"We don't know what is going to happen in France, but we will have a referendum on the constitution in any event—and that is a government promise".

He went on to say:

"what you can't do is have a situation where you get a rejection of the treaty and then you just bring it back with a few amendments and say we will have another go".

But is that not exactly what is happening now? That is the deceit … This House is at the lowest ebb of my lifetime. People's contempt for our institutions and our Parliament is at a level that I have never perceived before. Why? Because we are not trustworthy. That is the truth. People do not believe what we say.

Then there was Austin Mitchell, another veteran. Amongst the things he had to say was:

… Most exciting of all was the revelation from my right hon. Friend the Foreign Secretary, whom of course I strongly support, that next year we shall be facing 20 days of total futility. That is the promise that he has held out to us. We shall be discussing a constitution, which is called a treaty - the constitution that dares not speak its name - for 20 days, but we cannot make a single change to it. We cannot put in a full stop or a comma, and we cannot do anything about abhorrent apostrophes. I am already looking at holiday brochures and wondering whether the Commonwealth Parliamentary Association is having any decent trips that I can go on to get away from that discussion. The most futile exercise that we have had in this House will be fascinating.

There was then an intervention from Kelvin Hopkins:

I agree with my hon. Friend. It is rather like having marriage guidance after one has been divorced.

… What is the use of discussing something that we cannot change? It is important to amend this constitution, because it will be our constitution if it is passed - it will say what we can and cannot do, and it will take powers away from this place. It is thus important that we are able to have our say on it. It will make us part of a larger entity - a larger state - and it will close the door on that. That is what it is about. If we cannot change that and if we cannot put it to the people, we are futile and useless.

Then there was Gwyneth Dunwoody, responding to a comment by William Hague, about some detail of the treaty. She adds:

…Is he aware that we do not need any kind of change, because as we have recently seen with Galileo, it does not matter what the House of Commons thinks about particular items, if our views are to be totally ignored through the use of qualified majority voting? 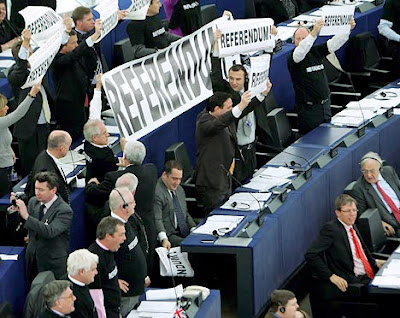 So there we have it, but most eloquent is Austin Mitchell: "We are futile and useless". And, for the moment, he and the rest of us – we share the same feeling. But never under-estimate the power of sullen, smouldering resentment. The "colleagues" – Brown included – may have pulled a fast one, but we don't like it and will not let it stand.

Brown and the "colleagues" should remember Kipling and his poem on the advice of a dying Norman to his son. It goes in part:

"The Saxon is not like us Normans. His manners are not so polite. But he never means anything serious till he talks about justice right. When he stands like an ox in the furrow - with his sullen set eyes on your own, and grumbles, 'This isn't fair dealing', my son, leave the Saxon alone.

"Appear with your wife and the children at their weddings and funerals and feasts. Be polite but not friendly to Bishops; be good to all poor parish priests. Say 'we,' 'us' and 'ours' when you're talking, instead of 'you fellows' and 'I'. Don't ride over seeds; keep your temper; and never you tell 'em a lie!"

Mr Brown goes to Lisbon on a lie – to join the "colleagues" in the perpetration of a lie. In our Kiplingesque way, we are left behind to mutter: "This isn't fair dealing". We know not how we will do it, and it matters not how long it takes, but we will extract our revenge.