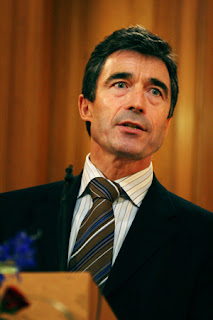 Such is the iron grip that the "colleagues" have over their new constitution treaty that even the Danes are deserting the ship, their government having finally decided that a referendum is not necessary to ratify the treaty.

This was an outside chance at best, but it is now firm policy. Prime minister Anders Fogh Rasmussen (pictured) told a news conference Denmark today that it would ratify the treaty in parliament, where – conveniently - a majority supports it, even the leading Danish opposition party, the Social Democrats.

Only Ireland is now left, as the only country certain to hold a referendum on the treaty and, although there will be a valiant fight there by the Eurosceptics, this hardly seems enough to stop the great Juggernaut of European integration.

History tells us though that hubris is always followed be nemesis. Such is the contempt the "colleagues" have for their own peoples that it can only be a matter of time before the mutual feeling is reciprocated in a more tangible form.

It will not necessarily be focused on the EU, but there can be no doubt that, when the political élites become so completely detached from their peoples, there is always a price to pay.