An exercise in hypocrisy 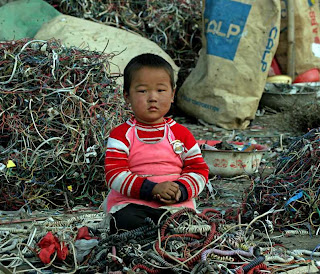 According to the Independent in a piece published just before Christmas, around 11,000 tons of unused mobile phones sit dormant in drawers across the UK. Furthermore, that figure is likely to rise this Christmas as people upgrade to better devices.

Factoring in old laptops, games consoles and portable music players, the paper says, the environmental implications of celebrating Christmas with a new digital toy start to look ominous, as most of the older electronic products will end up in landfill sites, leaking dangerous chemicals into the earth.

Of all the newspapers in this country, however, the Independent should know better than to make that claim. Courtesy of the EU's Waste Electrical and Electronic Equipment (WEE) Directive and the increasingly expensive landfill tax, driven by the EU's Waste Framework Directive, very little of this obsolete equipment will end up in landfill. Instead, it will be exported to China and other developing countries where it will be recycled, the basic materials stripped out to feed the ravening demand for new consumer goods.

In today's Telegraph, the human costs of this process are made clear, in an article featuring Guiyu, the "Chinese town where old presents go to die". Described as a "giant scrap-yard" the whole town is so dangerously polluted that its children are being clinically poisoned.

According to this article, a study at nearby Shantou University found that of 165 children aged between one and six in Guiyu, 135 - 82 per cent - had clinical lead poisoning. 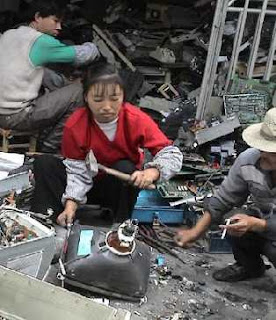 Even the Daily Telegraph admits that the problem is not new, its journalists having first visited Guiyu seven years ago. Moreover, the trade has been covered extensively by Greenpeace and other newspapers, featured in this blog. Since its first visit, however, the Telegraph comfortingly assures us that, "the European Union has banned exports of E-waste".

And therein lies a vast core of hypocrisy. As the paper points out, this has not made the slightest bit of difference – the problem goes on unchecked. According to the Environmental Agency, "unscrupulous middle men" are exploiting a loophole by defining the material as second-hand goods for resale rather than as waste – despite their intention to break it up.

The hypocrisy stems from the simple fact that the loophole was readily evident at the time the EU implemented its ban, which took effect on 1 July last year, three years after being promulgated and two years after the Chinese government implemented its own ban on waste imports, with equally minimal effect.

The fact of the matter, therefore, is that the EU – like other legislators – is going through the motions, being seen to do something about the problem, but not taking any action that might actually be effective.

In terms of preventing the scandal of Guiyu and towns like it, it would be eminently possible to devise systems that ensured the protection of workers’ health and of the environment. Wielding a big stick, the EU – with the approval of its member states – could either ban the import of goods from any country which did not maintain health or environmental standards (something it could do under existing WTO rules) or it could simply ban completely the export of used electronic equipment, whether defined as waste or not. 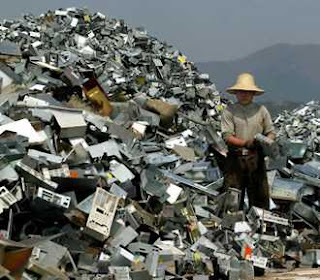 As an alternative, a more complex scheme could be devised, where the material could only be exported under licence, direct to an approved recycling establishment, where standards conformed with all current EU health & safety and environmental laws. To ensure conformity, these would have to be subject to full-time supervision by EU appointed inspectors – as is the case with slaughterhouses in third countries which are permitted to export meat to EU member states.

The problem with any of these solutions, though, is cost – and much else. A ban on the export of waste (combined with the current waste laws) would force member states to deal with the waste themselves, and confront the massive cost of so doing. A ban on imports, on the other hand, would cut off EU member states from a source of cheap consumer goods and have a massive effect on their economies and competitiveness.

The alternative option, however, would be feasible, except that the costs would be so huge that there would be no takers for the materials recycled. The EU would either have to subsidise the recycling plants, or extract a levy on imported goods to pay for them, neither of which would be politically or economically possible.

For want of effective action, therefore, the EU contents itself with useless laws, dumping the problems on third parties, while congratulating itself over its own environmental credentials. In so doing, it turns a blind eye to the human cost and environmental damage caused by its inaction, wringing its hands over the suffering, while doing absolutely nothing which might bring it to a halt.

This, one can assert, is yet another of the EU's magnificent achievements for the year of 2007, one which it is set to repeat in 2008.