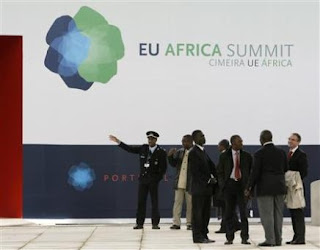 As European and African "leaders" arrived for today's summit in Lisbon – minus, of course, Mr Brown – others were discovering that the one most pressing issue on African continent (apart from Mugabe’s destruction of his own economy) wasn’t even on the agenda.

Thus reports The Guardian, the said "leaders" are being accused by parliamentarians and human rights groups on both continents of trying "to sweep human rights issues under the carpet."

Forty MPs from across Europe and Africa published an open letter saying they were "surprised and disappointed to note that at a two-day summit of the leaders of our two continents, there will be no time allotted to discuss the continuing crisis in Darfur that has claimed over 200,000 lives."

Nor can it be said that the British media – or the blogs for that matter – are taking any great interest in the issue. Humanitarian concern, it would appear, is definitely selective, to be switched on and off as the occasion demands.

And since there is no direct British involvement, the mission having been left to the "colleagues" to organise (not) we need not concern ourselves with a massive failure of political will that is and will continue to condemn hundreds of thousands of Africans to misery and death.

But, hey ho! What was it, fifty-plus reporters waiting outside the former home of the "dead" canoeist on the off chance that his wife put in an appearance, with hacks despatched to Panama in their droves, all to cover the story. At least we can rest comfortable in our beds, knowing that the media (and the "colleagues") have got their priorities right.