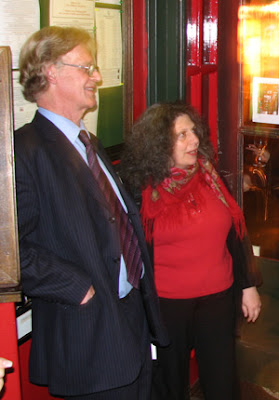 Another example of the media's inability to see a story staring it in its face came yesterday in the Booker column, as he charts the bizarre twists and turns of the continuing drama of the British government attempts to ban the People's Mujahideen of Iran (PMOI).

Unrecorded by any mainstream journalist apart from Booker (seen here with our revered co-editor), he tells of how Gordon Brown was last week put on the spot over "a truly extraordinary act of serial illegality committed by his Government."

This is the nub of the story – that this government, our British government is acting illegally – yet the MSM in general does not seem to want to know.

Booker's story continues with Brown being personally accused in Brussels by senior members of the European Parliament of acting in flagrant defiance of both British and European courts – in, Booker writes, "a futile bid to appease a murderous tyranny that has recently stepped up its campaign of terror against its own people, and is also supplying arms used to kill British troops in Iraq and Afghanistan."

Readers will recall that the British Government is flouting the law in all directions by refusing to remove from its list of terrorist organisations the PMOI, part of the National Council of Resistance of Iran (NCRI), the movement leading the peaceful struggle to replace the Iranian dictatorship with a secular, democratic government.

On November 30, in an action brought by 35 MPs and peers, the High Court ordered the Home Secretary to lay an order before Parliament removing the PMOI from the list. The court ruled that the decision to include the PMOI had been "perverse" and "unlawful", since it was not a terrorist organisation. It had only been outlawed alongside al-Qa'eda, as Jack Straw admitted, because this was demanded by Teheran.

The Home Office announced its intention to appeal against the court's ruling, and on December 13 Mr Brown told MPs on the Commons liaison committee that his Government would ignore the court judgment, as the Foreign Office informed Teheran. But on December 14 the High Court refused leave to appeal in unqualified terms.

The only justification the Government could now claim for disobeying the court was that the EU had, on British instigation, placed the PMOI on its own list of banned terrorist organisations.

But last December this decision too was ruled as "unlawful" by the European Court of Justice. In an unprecedented act of defiance, the EU's Council of Ministers agreed, twice this year, to ignore that ruling, again at Britain's behest.

If the British Government appealed to the ECJ against the High Court's ruling, it could expect little sympathy, since the ECJ has already ruled that the ban on the PMOI is contrary to EU law. Our Government has thus been comprehensively caught out in its reckless illegality.

In Brussels last Tuesday, Mrs Maryam Rajawi, the acting head of the NCRI, appeared before MEPs at the behest of an array of the European parliament's senior office-holders, including three vice-presidents.

"Do not let history judge you as it did Neville Chamberlain," she said, in a direct plea to Mr Brown to stop flouting the law by outlawing an organisation that enjoys huge support from the mass of the oppressed Iranian people and first alerted the world to their regime's plans to develop nuclear weapons (plans that she insisted are far from having been abandoned).

"Look at the carnage caused by the mullahs in Iraq, Afghanistan, Lebanon and Palestine," Mrs Rajawi continued. "Do you not know that some day the British Government must answer to the people of the world for setting the stage for World War Three?"

More than 700 MEPs and MPs from all over the EU supported Mrs Rajawi's call for the UN to discuss a dossier that details the appalling human rights record of the current Teheran regime, ranging from mass executions of political dissidents and "the public hangings of youths and even women from cranes" to "stoning to death" and "horrific tortures".

Thus does Booker conclude that "the real puzzle" - as Mrs Rajawi pointed out - is who has benefited "from Britain becoming the main supporter of the mullahs' regime, the godfather of terrorism"? It is a question, he writes, to which Mr Brown really does owe us and the world an answer.

Needless to say, with the wider media completely failing to follow this story, Brown is getting an easy ride over what amounts to a scandalous and bizarre failure in British foreign policy.