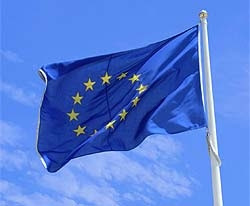 To be fair to UKIP, they picked it up although, as they so often do, they seem to have got some of the details wrong. The piece was repeated by Devil's Kitchen and the essence was conveyed by Benedict Brogan's blog for The Daily Mail. He writes:

Meanwhile, remember the Government's assurances that all constitutional references have been stripped out of the Constitution Treaty? Turns out the Germans have teamed up with some EU chums to slip an extra declaration into the final text – No. 52 - which declares support for the symbols of the Union, including the flag, the anthem and the motto. Sneaky.

Oddly enough, that seems to be the limit of comment from UK sources – with not much elsewhere. The most comprehensive report seems to come from the Malta Independent which, under the heading, "Malta re-affirms loyalty to EU symbols", tells us that Malta, together with 15 other EU member States, "has signed a declaration of loyalty to the EU symbols – the flag, the EU anthem Ode to Joy, the euro as the European currency and Europe Day on 9 May."

Unlike the others, the paper acknowledges its particular source, the French website Publius.fr, but the full text of the declaration is now available on the Council website, as Declaration 52. It reads:

Belgium, Bulgaria, Germany, Greece, Spain, Italy, Cyprus, Lithuania, Luxemburg, Hungary, Malta, Austria, Portugal, Romania, Slovenia and the Slovak Republic declare that the flag with a circle of twelve golden stars on a blue background, the anthem based on the "Ode to Joy" from the Ninth Symphony by Ludwig van Beethoven, the motto "United in diversity", the euro as the currency of the European Union and Europe Day on 9 May will for them continue as symbols to express the sense of community of the people in the European Union and their allegiance to it.

These, of course, were the very issues that were omitted from the EU Constitution, giving the lie that the Lisbon Treaty had been stripped of "constitutional elements". But here they are back again – albeit in a declaration which has no legal force.

One notable exception, observes the Malta Independent - apart from the mainly Euro sceptic countries such as Denmark and the UK - is France under President Nicolas Sarkozy. It looks as if my co-editor was on to something.