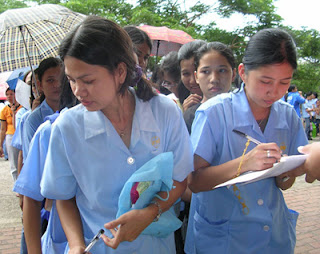 Last week's announcement by the government that it is to introduce "tougher rules for unskilled migrants" is simply a bid to show that it is tough on immigration, without having any material effect on the flow of migrants into this country.

The clue is, of course, that it is progressively changing the rules in the one area in which it still has any power – third county (i.e., non-EU) immigration – a strategy akin to closing the portholes on the Titanic in a bid to stop it sinking.

But, in exercising that power, a nasty little situation is developing which will have a significant impact on thousands of Filipinos, already in the country. These are the so-called "senior carers" who are giving good service in hundreds of care homes, doing jobs that few Brits want to do, for wages often close to the minimum.

Without consultation, it seems, the Borders and Immigration Agency introduced on 13 August of this year a new requirement for "senior carer" visas, applying to all those who had not yet qualified for permanent residence under the five-year rule.

Unilaterally, it has imposed a minimum hourly wage of £7.02 per hour (as against the £5.52 minimum wage) for these workers and, unless they are able to find employers who are willing to pay them this rate, their visas will not be renewed and they will be deported.

Such is the concern that, according to the Manila Standard, this brought a direct intervention from Philippine president Gloria Macapagal Arroyo last week, in a bid to prevent an estimated 2,000 of her fellow citizens being summarily ejected from the UK.

The cause has attracted senior backbencher Gwyneth Dunwoody (she of Galileo fame), who has tabled an early day motion, calling for a temporary amnesty for non-qualifying foreign care workers

Targeting the latter group is likely to cause a crisis in the healthcare industry, with private groups like Southern Cross, Barchester and Four Seasons being reported as refusing to implement the pay hike. Not only would it have to be paid to the Filipinos, it would also have to be awarded to the rest of the care staff in the sector, wiping £10 million off the bottom line - all in the context where the bulk of fees are paid by Local Authorities, which are not prepared to pay any increases.

What is especially bizarre is that the National Care Association recommends a salary for a senior carer of £6.00 per hour and there is nothing to stop employers paying the minimum wage of £5.52 to indigenous staff or immigrants from EU countries.

Basically, therefore, this is a discriminatory measure, applied retrospectively to non-EU workers who have been encouraged to come to this country and already have stable employment, all to make room for other immigrants who are queuing up to take their jobs. But, instead of doing it honestly, the government is using a mean-spirited, back-door device of pricing these workers out of the market, something it would not be permitted to do with EU "citizens".

That is the level to which our government has sunk - we can't deport criminals who happen to be EU citizens, so we are reduced to kicking out innocent people who make a genuine contribution to our society.

More from Tapestry, who thinks Cameron should take a hand. He is not wrong.