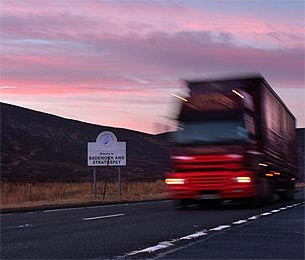 The recent article about the planned consultation on lowering the drink-drive limit to "bring us in line with Europe" has sparked a flurry of comment in the letter pages of The Daily Telegraph today.

Not least is Stanley Johnson from Minehead, Somerset, who hopes that any Department for Transport consultation "takes fully into account the views of those who live in isolated rural communities such as Exmoor," and asks "What on earth has this got to do with Europe?" He should read this blog.

But particularly interesting is the letter from Kevin Fiske, of Hungerford, Berkshire, who writes as follows:

Sir - I was stopped and breathalysed three times in the same place in less than a fortnight this year.

The officers watched from a lay-by and targeted only vehicles leaving our local pub. Each time I was simply asked the rhetorical question of where I had come from, and if I had had a drink. No comment was made about my driving or the roadworthiness of my vehicle. Each time I answered truthfully and each time passed a breath test. Inert and mostly invisible over rural crime, the police here only have themselves to blame for being held in increasing contempt by once-supportive citizens.

Therein lies an important point in that, as laws become more intrusive and draconian, the overall effect is to sour the relationship between ordinary people and the police. This, undoubtedly, leads to a long-term reduction in the effectiveness of policing, without addressing the issues at which the law is directed.

But there is also a more fundamental point. Year after year, we see a ratcheting up of the law, increasing penalties, more speed cameras, higher fines and more aggressive policing, all in the name of increasing road safety and reducing road deaths.

Yet, this morning we see in The Scotsman a story about a report which states that more than 40 percent of Scotland's A roads have deficiencies such as hazardous junctions or insufficient crash barriers. And, crucially, amongst the roads highlighted as the least safe are sections of the A9 between Perth and Inverness.

According to Dr Steve Lawson, one of the authors of the report, it "…shows clearly that many roads do not provide satisfactory injury protection." He goes on to add, "Dysfunctional one-star and two-star main roads, many not built to cope with today's traffic, have death rates at least ten times higher than other roads and are commonplace in the UK. This is unacceptable when there are well-known means of eliminating injury risk."

Now, go back to September 2005 and we read in The Scotsman (again) a report of how Tavish Scott, the then transport minister, rejected a scheme to spend more than £600 million "to turn the A9, Scotland's most dangerous trunk road, into a dual carriageway." Figures had revealed that there had been 82 deaths on that road in the past five years - the highest number of fatalities for any trunk road in Scotland.

By this contrast you can see the pattern. Ministers will support and actively advocate any number of measures dedicated to "road safety" when it requires the motorist to spend more money on equipping a car with safety measures. They will happily load the responsibilities on drivers, demonising, persecuting and prosecuting them – and lining their coffers with the increasing revenue from fines. But, when it comes to spending a fraction of the money extracted from them by way of taxation, to make roads safer, they are nowhere to be seen.

It is that, above all, which conveys the underlying perception of unfairness – of injustice in the system. It is always a one-way process; the demands are made of us, the motorists, yet there is no reciprocity – no sense that government is doing its bit, or is really concerned with road safety, other than as an opportunity for extracting yet more money out of over-taxed drivers.

This, of course, is by no means an EU problem, per se but what we are seeing, on the one hand, is that the EU is making it worse and, on the other, that the gradual encroachment of the EU in road safety matters prevents national governments – if they were so inclined – taking a more rational (and effective) approach.

Thus, rather than looking to our own politicians for relief, we find that they are increasingly powerless. Meanwhile, the monster they have unleashed is nurtured by the Brussels, turning driving from an enjoyable experience to a stressful, expensive and miserable chore. And such are the benefits of our membership of the European Union.