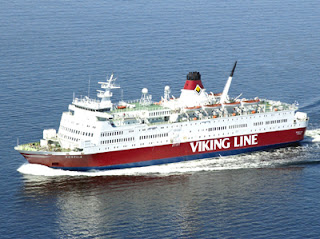 Spend any time amongst the "colleagues" and you will soon hear this phrase, spoken with the sort of disdain that is usually reserved for President Bush – or Hitler, the two being inseparable in the minds of some.

Anyhow, social dumping has become a shorthand for the heinous crime of transferring jobs from highly paid Western countries to other EU countries in Central and Eastern Europe, where the workers are prepared to work for less.

Yet, despite the horror displayed at this practice, we now learn, courtesy of the BBC that the ECJ has formally approved it, giving carte blanche for companies to fire their existing workers and hire in cheaper labour.

This is something we wrote about January last and concerns the Finnish ferry company, Viking, which replaced the crew on one of its ships with Estonian workers, in order to cut costs.

The case centred on the Finnish passenger ferry, Rosella which plies the three-hour crossing between Finland's capital, Helsinki, and Tallinn, the Estonian capital. It was crewed predominantly by Finnish nationals and the owners want to re-flag the ship and replace the crew with cheaper Estonian labour.

The trades union had then intervened, preventing Estonian union members from negotiating with the company and threatening industrial action, ending up in the company taking out an injunction against the workers.

Before the court, therefore, were two issues, the right of unions to take collective action and the treaty right of "freedom of establishment" (which would allow the Estonians to take the jobs), putting two cherished principles in the EU at odds.

In the end, the court has ruled that workers are entitled to take collective action - if jobs and work conditions were under threat – but it has also ruled that any such action would be illegal if it restricted the EU's freedom of establishment.

Back in January, we speculated that the Court would have difficulty picking its way through the morass, but it seems to have charted a neat way through the minefield. Effectively, it is telling the unions that it does have a right to strike, but it cannot do so if the aim is to frustrate EU law.

That, of course, has significant implications for the UK. It effectively says that if your employer dumps you in order to take on cheaper labour from another member state, there is nothing you can do about it, and you need not look to help from any union.

The matter does not rest there, though. Next week, we expect another judgement – this one referred by the Swedish courts concerning a Latvian construction company called Laval un Partneri. Through its Swedish subsidiary, it won a contract to refurbish a school at Vaxholm, Sweden, but the company sought to use cheaper Latvian workers, a move blocked by the union.

When that happens, it is likely that the same principle will be re-affirmed. Social dumping is OK!