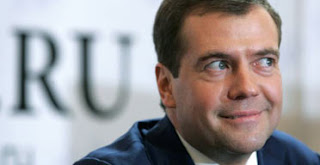 [I think a health warning is in order to stop some of our readers from wasting their time. This posting is not by Dr North as it is by me; it is not about that wretched treaty as I have seen too many of them come and go, each “heralding the end of this country”; and it has no swearing in it, asterisked or otherwise. Please pass it by.]

Another day, another Russia story. Actually, there were two on Wednesday but only one that the BBC Russian Service deemed interesting enough to discuss at length in their early evening news analysis.

Tuesday’s story was the amazing way in which future political positions are decided in Russia. When Viktor Zubkov was appointed Prime Minister in September, he inherited a couple of deputies, Sergei Ivanov, a former member of the KGB/FSB and former Minister of Defence and Dmitry Medvedev, a lawyer and Putin’s constant assistant as well as Chairman of Gazprom.

The question was which of these two gentlemen will be President Putin’s successor next March when the latter’s second term will expire. Yes, yes, I know there will be an election but that is not exactly going to make a great deal of difference.

A few days ago, Medvedev was asked by several different parties to run for the presidency. As he immediately agreed and was endorsed by President Putin we can be fairly certain that whenever we look at that bland visage [shown above in a Reuters picture] we shall be seeing the next President of All the Russias.

One cannot help feeling that somewhere fairly high on Putin’s list of reasons for supporting Medvedev is the fact that he appears to be considerably less tough than Ivanov and, more importantly, has no power base either in political or security police circles. Medvedev is, as Russian wags refer to him, Putin’s teddy bear. (Medved’ is the Russian for bear.)

The first thing that the not-yet-elected-but-certain-to-be-so President did was to announce that if he is elected he will ask Vladimir Putin to be the Prime Minister. Though the latter has not yet agreed to this interesting political arrangement, the assumption inside and outside the country is that Putin’s Mishka (teddy bear) is acting out a prearranged script.

So on Tuesday I was asked by the BBC Russian Service to comment on the development. Would I say that the West may find these goings on rather peculiar? Sadly, I had to explain that the West has stopped finding anything about Russia peculiar.

As a matter of fact, this grieves me. I’d like to see Russia take her rightful place as a really great country not as one that, sliding back into severe authoritarianism, relies entirely on the high cost of oil and gas for income and shows its “strength and greatness” by bullying its neighbours. My wish is unlikely to come true.

On the basis of nothing very much there have been noises about Medvedev being friendly to business and, possibly, liberal in his economic views. As Putin’s teddy bear he has carried out the orders and as chairman of Gazprom he participated in all the bullying anti-business tactics.

Other news items tell us that Chancellor Merkel and Secretary of State Rice are prepared to work with Dmitry Medvedev. Apart from the Thatcherite echo (and how wrong she was about Gorbachev) one is forced to ask what choice these people have. Medvedev will be the President of Russia. How are political leaders going to get by without working with him?

In parenthesis, let me blow this blog’s trumpet. Never for one moment did we believe that Putin would retire from the fray as other, probably better-paid analysts did. Somehow or other he would become Prime Minister, was our judgement.

The two Wednesday stories had to do with Russia’s dealings with the outside world, on which the views of the President-in-waiting remain unknown. The story that agitated the BBC Russian Service enough to have a longish discussion on their early evening news programme was the closing down of the British Council regional offices.

Did I think this was important? Well, frankly, no but I had no objections to taking part in the discussion, which turned out to be rather entertaining as various Russian commentators tried to link a rather silly decision that hurts nobody but those few people in places like Yekaterinburg who might want to read English-language books and see English-language films to the Litvinenko case and other related matters.

I spent a few minutes trying to explain why Zakayev and Berezovsky are not being handed over. Undoubtedly, my comment that the decision on Zakayev had been taken by the court and not by the government was ignored by the listeners who would not believe it anyway but probably care very little about it.

One of the more official experts became rather worked up about Britain asking for the extradition of Andrei Lugovoi in connection with Litvinenko’s murder. The continuing demand, he asserted, was a slap in Russia’s face. As a matter of fact, I said and am repeating it here, there has been no continuing demand. Every now and then the subject comes up but not particularly strongly.

The Russian constitution says that no Russian citizen can be extradited to be tried in foreign lands. Well and good but everybody in Russia and in Britain knows that if Putin were to find it convenient to get rid of Lugovoi, even though he is now a Duma member, the man would find himself on a London-bound aeroplane with a one-way ticket in his pocket.

Another Russian expert on international relations expressed his view that Lugovoi was a “son of a bitch and a bandit” [oops, swearing after all but it is a quotation] not because he killed Litivinenko, something the expert knew nothing about, but because of his behaviour in general. But he is our SOB, whereas Zakayev is your SOB, he asserted.

The discussion led nowhere but we all agreed that closing down the British Council offices on a very flimsy excuse will make no difference, though I note that there have been the usual statements from Gordon Brown and David Miliband.

The latest news is that Vladimir Lukin, Russia’s human rights ombudsman [sic] has said that he did not like the decision.

The next Russia story is in the “win some” category. It seems that Polish veterinarian practices have improved to such an extent in the last few months that Russia has now agreed to buy Polish meat produce, thus demolishing one of the barriers that have prevented the signing of an EU-Russia agreement.

This might lead to a thawing in Russo-Polish relations, though if history is anything to go by, that can be merely temporary. The well-known Slavic brotherhood, invoked whenever it is politically convenient for Russia, has never really extended to include the Poles.

In the meantime, the British Council saga is causing some excitement among the political elite of Russia. According to the BBC Russian Service website [in Russian], Sergei Lavrov, the Foreign Minister has accused Britain of contravening international laws by insisting on keeping the two remaining regional British Council offices open.

Judging by his comments and several on the forum, this, too, is being used to build up the image of Russia being constantly under attack from external and internal enemies. Paranoia may be useful to Putin and his mates, the siloviki. It is not precisely the best way forward for Russia and her people.
Posted by Helen at 14:53