We are not your citizens! 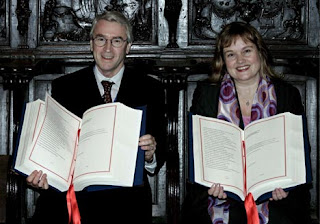 The loathsome "colleagues" - sans Gordon Brown – have done the dirty deed, signing the Lisbon treaty and defiling a religious building in the process, choosing as they did the 16th Century Jeronimos Monastery as the venue to parade their contempt for their peoples.

In a speech prior to the signing ceremony, Portuguese prime minister Jose Socrates said the treaty will take the European project one step further and make the EU stronger. He is not wrong, which is precisely why we object to it.

Reverting to the usual stilted polemics that characterises these occasions, he then added, "This is not a treaty for the past. This is a treaty for the future, a treaty that will make Europe more modern, more efficient and more democratic."

It really does take some gall to stand up in public and blather about "Europe" being "more democratic" but, such is their detachment from reality that these cretins actually believe what they are saying. 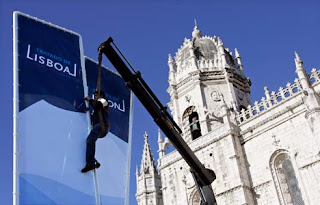 José Manuel Barroso, commission president then followed up, burbling in his own vomit-inducing way that, "From an old continent, a new Europe is born," telling us that with this treaty, "the EU is preparing itself to serve its citizens better and address world issues."

Previously, Socrates had told the "colleagues" that, "History will remember this day as a day in which new paths of hope were opened toward the European deal."

He right and wrong. History will indeed remember this day. But it won't be for the reasons he thinks. And, as for the EU preparing to "serve its citizens", we have a simple repost: "We are not your f*****g citizens!" The rest of our message is appended below.