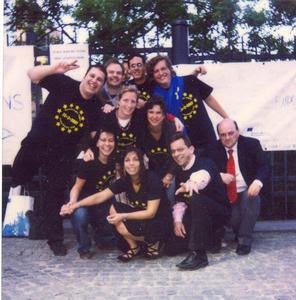 One of the most deep-rooted delusions of the British political establishment is the belief that the Single Market is about the liberalisation of trade, underwritten by a core belief in the market and the value of competition.

It is that, more than anything which has sustained the Tories in their support for the European Union, as they point to the various "liberalisation" programmes, most recently of the postal system and financial services.

No more is this delusion evident than in today's The Daily Telegraph leader. It comments in not-uncritical tones on the recent – if as yet abortive – proposals of the EU commission to allow British patients facing an "undue delay" for treatment in this country to travel anywhere in the EU for an operation and the NHS would have to pick up the bill.

This, opines the leader, is "a natural extension of the single market into the public sector and could have the most profound implications for the way health care is delivered here." But, it goes on to say:

If the principle of free movement across the EU for state-funded health care is established, why not genuinely free movement within the United Kingdom? This is a voucher scheme in embryo, offering the potential of a genuine internal market in health.

There is indeed nothing wrong with that latter idea, and it was this that formed the basis of the tribal exchange between Tory and Labour, the EU initiative being seen, in effect, as a "stalking horse" for the forced introduction of competition into the NHS.

However, what this tendency does not understand is that the profoundly socialist and dirigiste European Union has no commitment at all to free market values. In fact, it detests them.

Therein, of course, lies an apparent paradox, as the commission has been pre-eminent in the battle to break up national monopolies – like the postal services, energy supplies and the rest – enforcing a more "liberal" market where the various "actors" are able to compete with each other on the European stage.

But, therein lies the answer. The European Union is primarily motivated by its rooted antipathy to nationalism, and the vast state monopolies are bastions of that nationalism. They also, for better or worse, contribute to the sense of national identity, evident in so many of the titles – British Gas, Électricité de France, Deutsche Post, and so on.

Thus, the long term objective of the European Union is not to introduce competition into these enterprises, for the sake of it, but to break them up, in pursuance of its broader objective of destroying the vestiges of national identity and control.

The overall plan is then to recreate them as "European" players and, since they operate across borders, this calls for and legitimises regulation at the European rather than national level.

So it is with the health services of the different member states, which are one of the last major bastions of national control. Furthermore, they are services which, in many ways, legitimise the intervention of national governments and give them much of their rationale.

It was entirely predictable, therefore, that these services should be a major target for the European Union. But, as we pointed out yesterday, its interests are not those of the patient, nor the efficiency of the services. It seeks instead to break up national health services and to recreate them as a European services – all in the pursuit of political integration.

In that sense, the EU is not promoting competition, per se. It is using competition - the tool of the devil - to achieve its own wider aims. And while, in the shorter term, this may yield some transitory benefits to consumers, no one should have any illusions that the resulting European monoliths, tied to Brussels and subject to its increasingly draconian regulation, will be any better than the national services they replace.

Those who see in the EU a champion of the free market, therefore, are nothing more than useful idiots, smoothing the path for continued political integration.