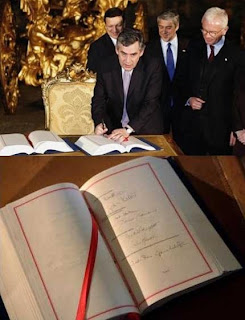 Even with my limited German, the sense of this headline in the Frankfurter Rundschau comes over loud and clear: Die EU-Eliten ignorieren das Volk - "The EU élite ignore the people".

That the message comes from a German newspaper tells its own story, but the same message can be found in The Daily Telegraph leader, albeit focused on the bizarre behaviour of our leader at the signing ceremony. But, says the paper, "The embarrassment caused by yesterday's imbroglio will be as nothing compared to the damage that will be done if the Prime Minister continues to rule out a referendum after giving such an unequivocal manifesto promise."

This paper is not the only one to warn of battles to come, with The Daily Mail warning that the fight for a referendum continues. While it may not be a high profile campaign with hundreds of thousands marching in the streets, such is the affront caused by this wilful contempt of the wishes of the people that it promises to be a continued irritant in the body politic.

This, in fact, transcends normal politics because it is such an affront. It is not a matter of disagreement, in the normal political sense. It is about the final detachment of the political élites from any semblance of democracy.

And, for all the hubris of the loathesome "colleagues", as far away as the United States, the transparency of their pretence in bringing democracy to the European Union is all too evident, with the New York Sun remarking, "The bell will toll for the independence and democracy of Europe's ancient nation states if the Lisbon Treaty becomes law."

The interesting thing is that many of the UK political blogs have not really understood this yet, and are still wrapped up in their own little bubbles. And tribalism still comes to the fore, with the Conservatives seeking to maintain very narrow political advantage, without addressing the substantive issues.

Thus, we have William Hague attacking Brown for signing the renamed EU Constitution “without letting the British people have their say”. He asks, "what democratic right" Brown had to sign away a "swathe of powers" to the EU, and asserts that Britain was now left with the "worst of all worlds", after Brown's "sulky rudeness" over the signing ceremony.

But the time is fast approaching where the lack of leadership from the Tories is going to be crucial. So far, they have hedged their bets about their post-ratification plans – buying time by concentrating on the referendum issue. That will only last so long before the pressure for a firm statement of intentions becomes insistent.