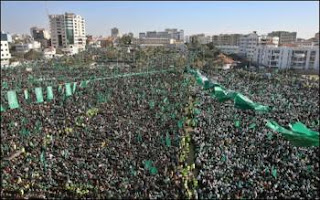 In a way it is reassuring that some things just never change. Global warming may become a distant memory as the weather turns extremely cold in the northern hemisphere (as it always does in December); President Putin may appoint back the next president of All the Russias; the American presidential election campaign may throw up the odd surprise.

One thing goes on relentlessly: the Middle Eastern peace process. Not much peace there, one may argue but there is a great deal of process. Part of that process are the endless meetings of the Quartet Principals, which sounds like a piece of modern classical music but is, in fact, considerably less tuneful than the late Karlheinz Stockhausen’s efforts. At least some people understand these but I have never come across anyone who has understood the purpose of the Quartet Principals.

They do, however, produce statements and this meeting was no different. A statement was issued.

The Quartet lauded the success of the November 27 Annapolis Conference, which resulted in agreement to launch bilateral Israeli-Palestinian negotiations in order to conclude a peace treaty and demonstrated broad regional and international support for Israeli-Palestinian and comprehensive Arab-Israeli peace. The Quartet welcomed the commencement of Israeli-Palestinian negotiations to resolve all outstanding issues, including all core issues, and looked forward to vigorous, ongoing and continuous negotiations. The Quartet reaffirmed its commitment to remain closely involved and to support the parties’ efforts in the period ahead as they make every effort to conclude an agreement before the end of 2008.

Only in the insane world of peace processes can one solemnly laud the success of a conference that achieved nothing as one side of it still refuses to recognize the other side’s right to existence. But you see what I mean about it being more complicated than Stockhausen’s music.

What on earth do they mean by the sentence

The Quartet welcomed the commencement of Israeli-Palestinian negotiations to resolve all outstanding issues, including all core issues, and looked forward to vigorous, ongoing and continuous negotiations.

Vigorous the negotiations might be but those core issues, surely, involve the existence of Israel as an entity and the cessation of terrorist activity.

The Quartet condemned the continued rocket fire from Gaza into Israel and called for an immediate cessation of such attacks.

Wake me up when it happens, somebody.

Of course the crunch part of that statement is the following:

The Quartet reiterated its deep concern over the humanitarian conditions facing the population of the Gaza Strip and emphasized the importance of continued emergency and humanitarian assistance without obstruction. The Quartet called for the continued provision of essential services, including fuel and power supplies. It expressed its urgent concern over the continued closure of major crossing points given the impact on the Palestinian economy and daily life.

At the meeting of international donors it was decided to hand over $7.4 billion (€5.6 billion, £3.65 billion) to the Palestinians. Well, to be quite precise, the money was promised but, presumably, it will reach the Palestinian government if not necessarily the Palestinian people, judging by past performance.

What do they think they are playing with, a fruitmachine?

Curiously enough one organization to protest was Oxfam but, predictably, it did not tackle the real problem:

In London, the development charity Oxfam warned donors were pouring cash "into a leaking bucket," arguing that aid efforts already in place were being seriously hampered by Israeli restrictions on movement.

"The challenge is to fix the leak, not pour faster ... Due to Israel's movement restrictions and the blockade of Gaza, millions of dollars of aid for Palestinians are being lost," Oxfam's Middle East director Adam Leach said.

Either Adam Leach started saying something else and was stopped by his minders or he cannot think clearly. A leaking bucket means that the money is going somewhere else not being stoppered by Israel. Where is that somewhere else where all the money poured into the leaking bucket that is the Palestinian budget has gone? Could it be a selection of numbered bank accounts and terrorist organizations?

It would appear that while concern is expressed “over the humanitarian conditions facing the population of the Gaza Strip”, said population is happily demonstrating its support for Hamas and its determination to destroy Israel.

Waving green flags and banners, throngs of Palestinians poured into Katiba Square ahead of the rally at which Hamas leader Ismail Haniya and other officials reaffirmed their commitment to armed struggle against Israel.

"Resistance and jihad (holy struggle) is the best path to the liberation of Palestine, not negotiations and meetings, sitting at round tables and exchanging smiles and chuckles with the Jews," Haniya told the crowd.

You can tell Annapolis was a success and those core issues are going to be addressed.
Posted by Helen at 00:49