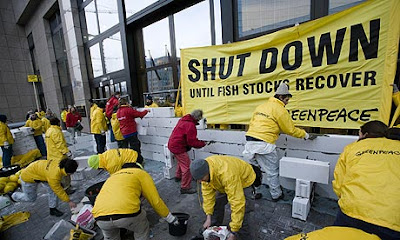 Greenpeace activists were up early this morning, blockading the Justus Lipsus building in Brussels, where our government later today is to start deciding how many fish our fishermen can catch.

According to one report, about 200 "environmental activists" used barriers and concrete blocks to seal off the entrances to the building, in a protest over-fishing in "European waters" – surely the waters of EU member states?

The little darlings adorned the locations near the entrance points with yellow banners marked: "Shut down until fish stocks recover". At the main entrance, they used cement to build a wall around 25 yards six feet high, while blocking other entrances with fish nets. The ever-tolerant Belgian police then moved in to detain some of the activists and pull some of the barriers down.

Greenpeace representative Francois Chartier at least got one thing right, in declaring that the CFP "is an absolute failure." Unfortunately, though, the dismal little "activists" can't get their brains round the reasons for the failure and instead are demanding cuts in quotas to a level either at or below limits recommended by "scientists". Has anyone told them that this will simply increase the amount of "discards" without actually reducing the humber of fish caught?

The faith these people have in "scientists" is quite touching really – not for them any doubts about the uselessness of the data produced.

But, for want of anything intelligent, Greenpeace's "cunning plan" to solve the fisheries problem is to have stocks to be administered by environment ministers instead of the fisheries ministers as at present.

How little these buffoons understand the ways of our government. Do they really suppose that shuffling the pack and putting different faces at the table is really going to make any difference at all?

But then, at least they managed to give some of the Eurocrats an unpleasant morning. Apparently, Brussels is down to -3C, with a very sharp frost. Beyond that, though, it is hard to see what else the activists achieved.