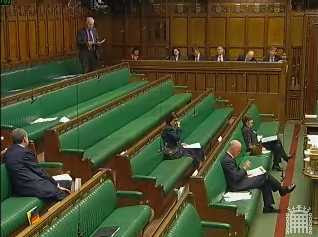 And so it came to pass that the high and the mighty gathered together in the hallowed hall of Westminster to discuss great matters of state, while the world held its breath, awaiting the outcome … or something not quite like that.

Said Mr Austin Mitchell, Labour member for Great Grimsby: "I am disappointed that debate on such an important subject is crammed into a quick gabble in the dying two or three hours of a deadly dull day. Fishing is more important than that."

Immediately before, Ann Winterton, Conservative member for Congleton had delivered her own speech:

It is some time since I have tried to speak in a debate on fisheries policy. I note that the issues are evergreen—as are most of the speakers, with the exception of our bright, shiny new Minister, whom we wish well in his job.

I intend to limit my remarks to the issue of discards, which has featured much in the press of late, particularly in relation to cod, as well as in this debate and at Question Time earlier today. There is absolutely nothing new about this situation, for it is simply a direct result of European Union fisheries policy.

Not only is the thorny issue of discards being repeated in relation to cod, but I can assure the House that the situation will continue to recur unless common sense eventually prevails. In 1986, the fishing industry itself highlighted the amount of haddock that was being discarded, and a debate followed about how discards of small fish could be avoided by the use of technical fishing gear. 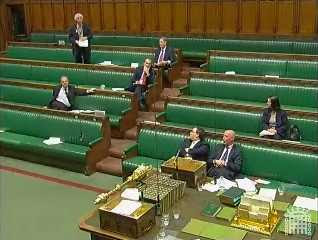 In the 1980s, vast amounts of small fish were being dumped, whereas now, with increased mesh size and different trawl designs, mainly marketable fish are being thrown over the side. The problem then affected coley, or saithe, another species that British vessels discarded in abundance.

Now, however, it is the cod catch that is being seriously affected. In the case of cod and coley, I must make it clear that we are talking about mature, marketable fish which are thrown back dead over the side to pollute the marine environment.

People may ask why this disastrous and wasteful practice is being allowed. The simple answer is that it is entirely due to the European Union's quota system. For those Members who may not remember when Britain joined what was then called the Common Market, on 1 January 1973 Parliament handed competence of Britain's living marine resource over to what has subsequently become the European Union, that competence to be shared equally between member states without discrimination.

As more countries have subsequently joined the EU, so the cake—the share each country is entitled to—has had to be divided up into smaller units. As a result, British vessels have been driven off the water to make room for the newcomers.

The quota system was introduced in 1983 in order to comply with an obligation in the original treaty and was disguised as a tool of conservation, although in reality it was a tool of integration. How else could the new EU resource be divided up to distribute to the participating states without their fishermen realising what was going on? Let us not beat about the bush. The politicians involved at that time did not tell the truth about the situation until 2002, and the industry was strung along until then.

Those Members who support the common fisheries policy, as an undisputed consequence, also support the greatest environmental marine disaster. That is a direct result of the integration process to secure the achievement of one European Union fishing fleet in what are now EU waters.

Only a couple of days ago, as I mentioned earlier, the special report by the European Court of Auditors confirmed that the common fisheries policy was a failure - quite an indictment, I should have thought. The CFP has failed because it is really about political union, not the management of fisheries. The quota system has created the discard system, which in turn has produced faulty scientific evidence. 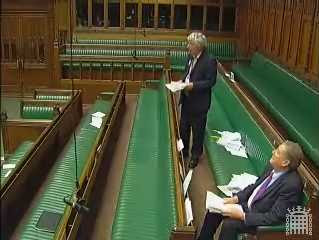 One only has to look at the successful system introduced in the Faroe Islands, where adult species are fished to a level that is sustained by the available food source. The Faroes still have limits on each species, but control catch rates by days at sea. They do not discard, so accurate figures are available about what is caught, unlike in EU waters, where no one knows exactly what has been killed. Therein lies the dispute, I should have thought, between the fishermen and the scientists. In the flawed European Union system, the food source itself has been destroyed.

The food source has been destroyed by the EU's previous high quota for those species lower down the food chain, such as sand eels, so is it any wonder that the adult stock is unsustainable?

If the food stock is not adequate, it makes it incredibly hard to have a sustainable adult stock, and if you force that adult stock up by virtually not fishing it at all, the adults will have to eat their own young or the young of other species. Any form of life can only be sustained by the availability of food, so the concentration of effort and policy should now be to increase the base of the pyramid of the food chain, not the other way round, which is the present practice.

However, it is encouraging to know that one of the wonders of nature is that this political, integrationist onslaught of mismanagement could still be overcome if the right policy were to be introduced. Only the rump of the original British fishing fleet survives today, the rest having been eradicated by Britain's European Union treaty obligations, but the unpalatable fact is that we can huff and puff in this House as much as we like, but as long as competence for fisheries remains in the hands of the EU Commission, there is nothing -repeat, nothing - that the UK can do to stop the discard problem.

When the European Union stops expanding and it presides over one integrated EU fishing fleet in all EU waters, which is what the Maastricht and Nice treaties were leading up to - that all national considerations should cease - it may take a look at the Faroese system and adopt it. 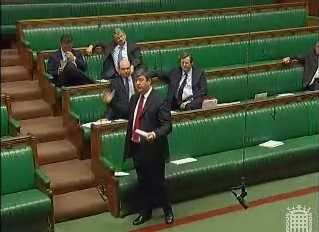 However, I have made no secret of the fact that I have always been an enthusiastic proponent of a return to British control of fisheries policy. I was delighted, therefore, to see that the Scottish National party's policy is to stick to its guns and continue to support the return of national control.

If that policy were eventually introduced in Scotland, admittedly against the odds, it would create an immediate improvement for the Scottish economy and coastal communities. It would also be wonderful to witness genuine marine environmental progress, even if it were limited only to Scotland at first. If only we and the rest of the UK would follow suit.

You can't say very much more than that. Earlier, however, during fisheries questions, Jonathan Shaw, the new fisheries minister, had stated his government's position:

And that is that. That is a position supported by the Conservative Party and, as long as that is the case – as Ann Winterton said – we can huff and puff, but there is nothing we can do. As one MP said afterwards, we might just as well have had a little discussion in the tea room, for all the good the debate did. It was a complete waste of time.