An unmitigated record of failure 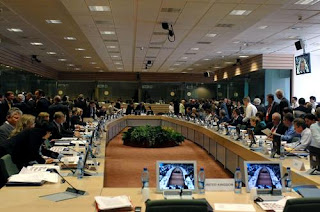 Published yesterday by the EU's Court of Auditors was the most comprehensive, unmitigated and comprehensive indictment of the Common Fisheries Policy – and no one noticed.

Actually, that's not strictly true. England Expects wrote a piece about it. We were too busy – and too preoccupied - to deal with it. Thus it lay there, on his blog, forlorn and unloved, despite a chilling account of the Auditors' press conference, which should have had this nation up in arms.

Why it matters, of course, it that it represents a sustained failure of an EU policy which, since it was introduced in its current form in 1983, has driven a once highly profitable industry into decline. It has reduced turnover to roughly £0.5 billion when, according to expert estimates based on successful fisheries models elsewhere, the industry should be worth at least £3 billion annually.

That is real money, real jobs and a real loss to the economy – an entirely avoidable political and ecological disaster brought about by a policy which is fundamentally and irretrievably flawed and one which, incidentally, was agreed – in the teeth of opposition – by the last Conservative government under the aegis of born-again environmentalist John Selwyn Gummer.

The essence of the failure is summed up in a two-page press release, which opens with the unusually stark and direct phrasing, "Lower catches and overexploitation of fishery resources have been observed for many years. These findings are now widely shared and represent the failure of the Common Fisheries Policy (CFP)."

But, says the press release, "since its inception in 1983, the objective of the CFP has been the sustainable exploitation of living aquatic resources. Setting total allowable catches (TAC) and national quotas in order to limit catch volumes is the cornerstone of this policy."

However, the audit carried out at the Commission and in the six principal Member States in fisheries terms led the Court to conclude that:

• catch data are neither complete nor reliable and the real level of catches is thus unknown, and, as a consequence, this prevents proper application of the TAC and quota systems;

• the inspection systems do not provide assurance that infringements are effectively prevented and detected; the absence of general control standards is an impediment to adequate control pressure and optimisation of inspection activities in the Member States;

• the procedures for dealing with reported infringements do not support the assertion that every infringement is followed up and still less that each one attracts penalties; as regards cases where Member States contravene Community legislation , the only instrument of proven effectiveness available to the Commission is an action before the Court of Justice for failure to fulfil an obligation; however, some of the inherent characteristics of such actions limit their utility and make this an insufficiently responsive instrument;

• overcapacity reduces the profitability of the fishing industry and, in a context of decreasing authorised catches, is an incitement to non-compliance with these restrictions. It also affects the quality of the data forwarded; the Community's current approach, which is based on reducing the fishing effort, is unlikely to resolve the problem of overcapacity.

Thus does the Court conclude:

If this situation continues, it will bring grave consequences not only for the natural resource, but also for the future of the fishing industry and the areas associated with it. If the political authorities want the CFP to achieve its objective of sustainable exploitation of fisheries resources, the present control, inspection and sanction systems must be strengthened considerably.

And therein lies yet another, most egregious failure. The Court, having recognised the failure of the policy then fails completely to understand – or admit – the cause of the failure. At its very heart lies the system of "total allowable catches (TAC) and national quotas in order to limit catch volumes" which, it says, "is the cornerstone of this policy."

Yet it is that very system which is fundamentally flawed, more so in mixed fisheries which comprise the bulk of the resource in the waters of EU member states, which give rise to the "discards" problem about which the media briefly took and interest a few weeks ago.

But, in a classic example of blinkered thinking, instead of going back to basics, to redress the fundamental flaws, the Court recommends more of the same – more inspections, more enforcement and tighter (central) controls.

This is exactly the same mindset that prevails throughout our legislative system. The "speed camera" issue is another good example. Having wrongly identified speed as the main cause of read deaths, the government introduces a network of speed cameras and when – as was entirely predictable – the regime fails to work, it reacts by adding more cameras and increasing the penalties.

However, the subtlety of the argument that, simply adding more laws and tighter enforcement to fundamentally bad law does not make bad law better is clearly beyond the ken of our political classes. Furthermore, it is something which the media – as a collective – is incapable of grasping. Thus, when confronted with the consequences of their own failures, both resort to doing what they are best at – nothing.