You can beat a Pinzgauer 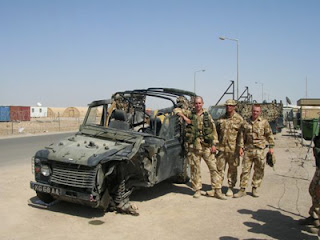 The Sunday Telegraph publishes a letter today from Graeme Rumbol, Managing Director, Pinzgauer Ltd, headed: You can't beat a Pinzgauer. He tells us,

I write in response to Christopher Booker's article published in The Sunday Telegraph on October 29, 2006 questioning the suitability of an armoured variant of the Pinzgauer all-terrain vehicle which my company is supplying to the British Army. I dispute Mr Booker's assertion that Pinzgauer's Protected Patrol Vehicle offers less protection for troops than Snatch Land Rovers currently used by the Ministry of Defence in Afghanistan. Protection is an extremely sensitive area and while our vehicle has new defensive features, we are unable to talk about them publicly for very obvious security reasons.

The article also failed to recognise the renowned off-road capability of the Pinzgauer, which has not been compromised in our new armoured version, and means it can be driven out of potentially dangerous situations by traversing terrain where other vehicles are unable to go.

Mr Booker stated the price of each Pinzgauer PPV is £487,000. This figure is wrong. The purchase price for our vehicle is less than half the figure quoted by Mr Booker. He seems to have failed to take into account in his calculations that our MoD contract also requires us to supply logistical support, spares, training and other essential support services which are all built into the overall costs.

The Pinzgauer has a superb reputation and, as such, I feel it important to clarify this situation.

We're banged to rights on the price. I simply took the posted contract price from Pinzgauer's website and divided it by the number of vehicles ordered. So we cannot say that near-on half a million pounds is the purchase price – simply what each of the vehicles are going to cost the Army. We stand corrected.

But, while Graeme Rumbol disputes "Mr Booker's assertion that Pinzgauer's Protected Patrol Vehicle offers less protection for troops than Snatch Land Rovers", we note he hides behind a veil of security in order to avoid giving any details. However, despite this reticence, that has not stopped his own company publishing the details in a trade brochure: see above. 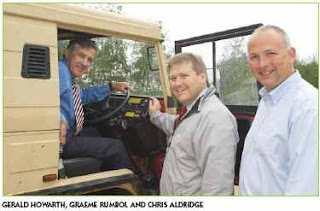 However, he can dispute all he likes. The Pinzgauer Vector, as we have indicated here and here is a killer of men, the weakenss confirmed by the specification.

The topmost photograph shows an unarmoured Land Rover which has been hit by a mine. The crew survived, with the energy of the explosion absorbed by the wheel and engine housing.

In a Pinzgauer Vector, the driver sits on top of the wheel, with only thin armour between him and any mine explosion. He would most certainly have been killed by the explosion from which the Land Rover crew walked away.

Interestingly, Mr Graeme Rumbol invited us down to Guildford to see his wonderful Pinzgauers. We agreed to come, as long as he could arrange for us to see a demonstration of him driving a Pinzgauer Vector over a 7 Kg anti-tank mine (half the protection afforded by an RG-31). Strangely, we have not heard back.

Thus, it seems, Mr Rumbol is not prepared to expose himself to the risk he is quite content for soldiers in Afghanistan to face in his product, for which he is being so amply rewarded by the MoD. I wonder why that is.