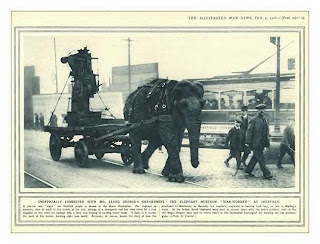 OK, we’re on again. If there are toys, there have to be alternative toys. I am spoilt for choice, which means that there will be many more alternative toy postings. Heh!

Elephants! Now there is a word to strike awe or terror into every toy-lover’s heart. Used in war since antiquity, these animals could be relied on to sow panic while charging the enemy.

They were used for ceremonial purposes, transportation and, as this picture shows, to pull munitions in Sheffield during the First World War. This pachyderm was, according to the caption in the February 9, 1916 edition of Illustrated War News, “unofficially connected with Mr Lloyd George’s Department”. Hmm. Wonder who his father was.
Posted by Helen at 23:32