A sense of déjà vu?

So, as the leaders of the European Union member states prepared to consume their lavish "Organic-Teutonic" banquet of braised ox, followed by baked apples at the German president's Bellevue Palace in Berlin, black-uniformed figures marched outside in a torchlight parade.

Interestingly, during the Nazi era, Hitler used this palace for his Museum of German Ethnology. And it is but a stone's-throw from Bebelplatz, the square located near Humbolt University where the Nazis held their first "book burning" on 10 May 1933. 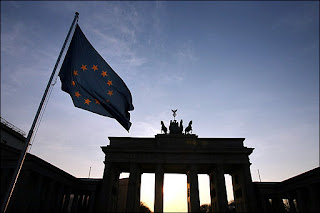 One can read too much into the symbolism, of course. But there is something vaguely distasteful about the extravagance of these celebrations for a political construct, that is risking opening up some very raw wounds.

What with talks of a European army and Barroso telling us that, "We need to inspire Europe's citizens with a vision for the next fifty years," it all begins to look unpleasantly familiar.