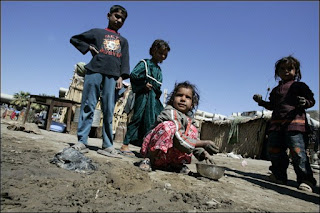 Through James Taranto's summary of “Best on the Web” we can see what the Iraqi poll actually said and leave aside the doom-laden reporting of the BBC and other media outlets.

Firstly, this is a survey of 5,019 Iraqis over 18, which makes it larger and most probably more representative than those famous BBC surveys across the world that invariably show that most people in most countries (well, the 1,000 that dared to respond in various Middle Eastern and African countries or in China) consider the United States to be the most evil system that ever existed in the world.

Only 27 per cent thought that they were in a state of civil war, despite the fact

Kidnapping also plays a terrifying role: 14 per cent of Iraqis have had a relative, friend or colleague abducted, rising to 33 per cent in Baghdad, since the fall of Saddam.

The figures in general are quite interesting:

But 49 per cent of those questioned preferred life under Prime Minister Nouri al-Maliki to living under Saddam, while 26 per cent said things were better in Saddam's era, 16 per cent said they were as bad as each other and the rest did not know or refused to answer.

Not surprisingly, the divisions in Iraqi society were reflected in the statistics: Sunnis were more likely to back the previous Ba'ath Party regime (51 per cent) while the Shi'ites (66 per cent) preferred the Maliki Government.

European governments would give their eye-teeth for support of that kind.