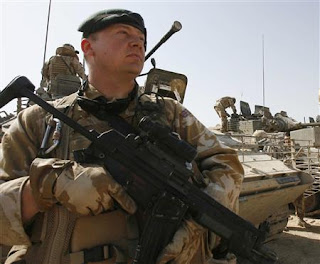 It was only yesterday morning that BBC correspondent Paul Wood, embedded with the Second Rifles in Basra, was confidently chirping over the airwaves that, "the British Army believes it is winning here".

This was in the same week that the Army had pulled out of its base in the Old State Building in central Basra, an event barely recorded by the BBC and almost entirely ignored by the MSM.

Yet, a mere two days later, fighting had erupted in the centre of the city, again given little attention by the BBC but recorded in depth by Sam Dagher of the Christian Science Monitor, his piece headed: "British leave, battle erupts over Basra".

The fighting, it appears, broke out between rival Shiite groups - those loyal to Moqtada al-Sadr and the Fadeela faction - and spilled out onto the streets. The CSM report (based in part on Reuters copy) records eyewitness claiming that masked gunmen had swept through the centre of the city carrying AK-47s and rocket launchers.

In scenes that appear to be redolent of the hand-over at al Amarah where the British Abu Naji camp was stripped bare by the militias, some of the fighting was reported to be over control of the vacated Old State Building.

A source from the Fadeela Party in Basra also said the party headquarters had been completely burned down in the clashes, and the fighting had then moved to the house of Basra's governor, Mohammad Musbih al-Waeli, a leader from Fadeela, which came under siege as gunmen tried to storm his residence.

Dagher argues that the turmoil signals the beginning of the kind of battles that could erupt in Iraq as outside forces depart, citing Martin Navias, an analyst at the Centre for Defence Studies at London's King's College. "There will be a power vacuum in Basra," he says. "As the British begin to extricate themselves from Basra, there will be fighting among these groups." Dagher' piece continues:

Fadeela officials said that "neighboring" countries, in a veiled reference to Iran, were backing certain factions in Basra including an individual they named who has known links to Mr. Sadr. "Iranian influence in southern Iraq is very strong and there are loads of Iranian personnel running around Basra, but which faction they are coming down for is unclear," says Mr. Navias.

"The British adopted a policy of live and let live. They never confronted the Shiite militias unless they were pushed in certain situations .... This allowed the different factions to assume power in the governing council, police and other institutions."

Reuters reports that hospital sources said seven people had been wounded in the clashes which seemed to have died down shortly after midday yesterday, when the intense gunfire dwindled to sporadic shooting.

A curfew was imposed for several hours as Iraqi police, soldiers, and British troops deployed in the area. However, British military spokesman Lieutenant-Colonel Kevin Stratford-Wright could only say that by the time British troops got into the city, "there wasn't much to see."

Curiously, few other media outlets have given the events much coverage either, one exception (at the time of writing) being The Times, which relies on correspondent James Hider, filing from Baghdad.

Hider cites Abdul-Qader Mohammed Jassim, the Iraqi defence minister, who just happened to be in London, saying that his troops were capable of tackling outbursts of violence and that he had brought forward the deployment of an extra 5,000 Iraqi soldiers to the city. For the time being, therefore, the line is holding.

Nevertheless, in a separate report, Reuters claims that the Mehdi Army is breaking into splinter groups, with up to 3000 gunmen now financed directly by Iran and no longer loyal to the radical cleric Moqtada al-Sadr. This, says the agency, is seen potentially as adding an even more deadly element to Iraq's violent mix.

Whether we saw some of that yesterday is a moot point, but it seems entirely compatible with the developments Reuters is reporting. One thing must be certain though: while the media spend most of its time and effort on watching the US activities in Baghdad and elsewhere – this being the main focus of BBC reports yesterday – the situation in Basra is far from settled. We could possibly be looking at a sharp deterioration in the security situation over the next few weeks and months.