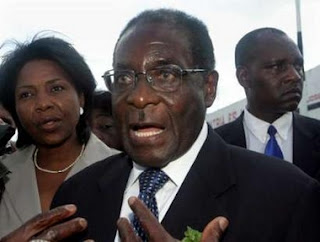 My colleague has already written about the risible list of 50 reasons why ignorant Independent journalists think the rest of us should love the EU. Let me concentrate on just one.

Reason number 18 says that one of the glories of the EU is a Europe-wide travel ban on tyrants such as Robert Mugabe. As it happens, it is perfectly possible to have a travel ban on tyrants across any kind of territory, should the countries in question wish to enact it. One does not need the European Union with all its paraphernalia for that.

The problem with that item is that it is not even true. The ban on Mugabe has been in place for some years. For all of that, President Chirac saw nothing wrong with inviting him to an African summit in 2003. The summit was yet another attempt on the part of the outgoing French president to prove that France was a significant international player. If that meant wining and dining some of the worst tyrants in the world and breaking EU sanctions on Robert Mugabe, well, tant pis.

There were attempts by human rights groups to arrest Mugabe while he was in Paris. These failed because of intervention by the French police.

Two years before that Peter Tachell had attempted to arrest Robert Mugabe in Brussels on charges torture under the 1984 UN Convention Against Torture. Under the benign gaze of the Belgian police and secret service agents Mugabe’s thugs attacked Tatchell and beat him unconscious.

For the record, though the British police have not behaved anything as badly, their zeal in arresting peaceful protesters outside Zimbabwe House yesterday does not fill one with great joy.

Now we come to the present. There is a meeting of the EU, Caribbean, African and Pacific MPs in Brussels going on, and it is best not to comment on the quality of the various political systems that are included. 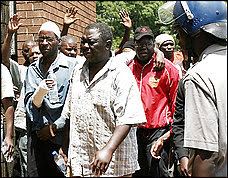 Suffice it to say that Zanu-PF delegates are attending the meeting though Glenys Kinnock is making the usual tut-tutting noises and regretting their presence. As one who is chairing the meeting she, presumably, had some say as to who was and who was not invited. No use regretting things now.

All of which is happening a week or so after the badly beaten members of the opposition, arrested during a peaceful rally and march, appeared in court. The picture on the right tells its story, though for some reason AP captions it as

Zimbabwean opposition leader Morgan Tsvangirai, center, appeared in a Harare court two days after a mass arrest. He and others were injured in custody.

Injured? How did they happen to get injured? Did they slip while playing cricket or go into a particularly rough scrum during a rugby match? 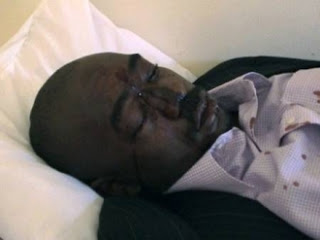 As our readers will recall, Nelson Chamisa, a member of the opposition Movement for Democratic Change, was badly beaten at Harare airport when he tried to board an aeroplane to go to Brussels. So he is not there and neither are any of the other MDC members who can barely move after attention by Mugabe’s thugs last week.

But one person who is in Brussels is Edward Chindori-Chininga, a former government minister, who is on the list of 100 Zimbabweans banned from entering the European Union.

It seems that he applied for a visa in Johannesburg (Thado Mbeki has still not made the slightest effort to control his colleague Mugabe) under the shortened name of Edward Chininga. No-one thought of checking and the visa was issued.

As AFP reports, it was all a bit of a mistake. The foreign ministry spokesman, who has been muttering about that mistake, has said that Belgium has taken steps to ensure that Mr Chindori-Chininga does not enter Belgian territory. So, where is the man? In the European Union or not? Nobody seems to know.

What of that reason number 18 for loving the EU?