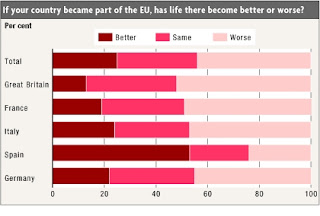 The Finanical Times today published the results of an FT-Harris poll, conducted in the EU’s five biggest countries - Britain, France, Germany, Italy and Spain - and the US.

The main finding was that only 25 percent of those questioned in EU member states felt life in their country had improved since it joined the EU, while 44 percent thought life had got worse.

However, despite many complaints about the EU, including a widespread view that it was too bureaucratic, only 22 percent of respondents thought their country would be better off if it withdrew, against 40 percent who believed it would be worse off. 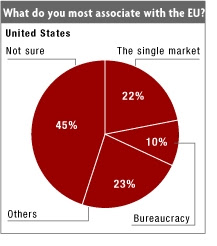 Furthermore, the poll, conducted between 28 February and 12 March, found that 35 percent of respondents thought the EU constitution would have a positive impact on their country, compared with 27 percent who thought the opposite.

The most Euro-enthusiastic state was Spain while, rather predictably, the most negative responses came from the UK. Some 48 percent thought we would be better off or remain the same if we left the EU. And, interestingly, respondents in the US showed a high level of ignorance on what the EU was about - some 45 percent failed to associate the EU with any specific policy or attribute.