Reporting from the West Bank 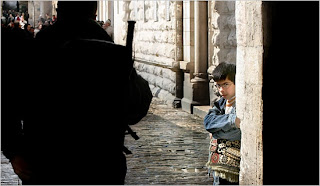 No matter what one's views are on the Middle Eastern problems (and there are many, not just one) one cannot help feeling sorry for the Palestinian people. Whichever way one looks, they are the victims – victims of other Arab states, who encourage them to fight Israel and refuse to help them or allow them to settle anywhere; victims of their leaders, who have stolen all the money that have been donated to the Palestine either to feather their own nests or to create more terrorist militias; victims, often, of their own poor ability to make choices.

And yes, they are often victims of Israeli violence, though this could be solved relatively easily: an acceptance of that country’s right to exist, an end to terrorist activity, meaningful peace negotiations would do it.

There is another body of people that victimizes the Palestinians: the journalists of the MSM, who refuses to write the truth about the situation, thus making it impossible for the people there to face up to it. We witnessed this in the extraordinary infantilization of the Palestinians after the election that brought Hamas to power. Many in the media cried out against the notion that western aid should cease until Hamas agrees to the three conditions that can lead to peace in the area.

Here is a longer piece about the MSM and its curious view of what is going on in the West Bank.