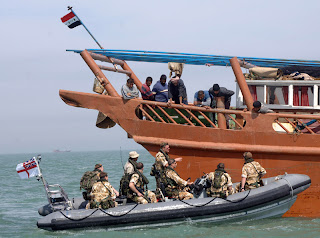 Our sailors and marines - why did they not defend themselves? They were not allowed to ... their rules of engagement did not permit it.

This was raised in Defence Questions today by Ann Winterton MP. She put to the defence minister that "the current rules of engagement that allow no conflict in Iraqi waters with Iranian forces" and thus suggested that "this led directly to 15 of our service personnel being abducted by the Iranians".

Defence minister Adam Ingram was evasive, telling MPs not to speculate. "Let us stand back and understand the sensitivity of the situation," he pleaded. "There is too much speculation about what happened and what did not happen."

Then, in classic fashion, he went on not to answer the question, offering only obscurity: "Those carrying out that mission clearly have to respond to the level of threat that is posed to them ... We will have to investigate that when they are safely returned to these shores and we get their version of events rather than the speculation that is being paraded around in the media and elsewhere."

But Winterton was not speculating. Directly from extremely angry servicemen recently back from Iraq, she had received information that boarding parties were under rigid instructions that left no room for discretion. Even though faced with Iranian Revolutionary Guards, every one of the Party knew that to fire a weapon (even a warning shot) would have ensured their personal Court Martial.

This still does not explain, however, why the boarding party was caught by surprise by six Iranian vessels (and no one has disputed that figure). The team was equipped with fast, highly manoeuvrable boats and, given an alert overwatch, the members should have got enough warning to enable them to break for the shore or call up reinforcements.

Interestingly, no further light has been shone on this murky episode in the unofficial Army forum, where such matters are often discussed at length. A moderator moved in quickly to delete threads and shut down further comment, on the grounds that, "there now exists a real danger that speculation and reported remarks influenced by genuine anger will be to the detriment of the safety of our people and OPSEC (operational security)".

That the incident is being widely discussed on media forums and comment threads seems to have escaped the board moderators, demonstrating an acute sensitivity on the subject.

As it stands, therefore, it looks like the boarding party members were set up like rats in a trap, unable to defend themselves, leaving the Iranians only to say thank you very much indeed for the free hostages. And instead of facing their own military courts, our people are now at risk of being paraded through the Iranian courts, to the utter humiliation of a nation which cannot even safeguard its own troops.

Meanwhile read this from Hot Air.