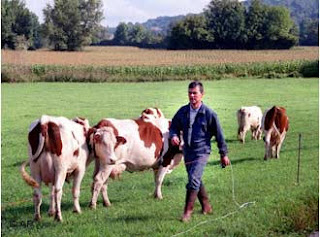 "The EU was invented 50 years ago this week," writes Daniel Hannan in The Daily Telegraph, "for two specific purposes: to prevent France and Germany from fighting each other; and to make Europe self-sufficient in food."

For sure, peace between Germany and France was very high up on the list of priorities of the founding fathers, but it also has to be said that food production was nowhere. In the original discussions, agriculture was barely considered, than then only in terms of vague aspirations.

Yet it remains a widespread myth about post-war European agriculture that it was the Common Agricultural Policy which boosted production and made farming prosperous. For instance, a fact sheet on the European Parliament website (The Treaty of Rome and Green Europe) claimed that…

the CAP produced spectacular results: the Community was soon able to overcome the food shortages of the 1950s, achieving self-sufficiency and then generating cyclical and structural surpluses.

But while we would expect this canard to find its way into the litany of benefits of the Common Market – although even The Independent did not try that one on – we would not expect our own "side" to repeat the myth.

The interesting thing about the myth though is that - as so often myths are - it is a complete inversion of the truth.

Far from there being any shortage of food at the time the Common Market came into being, the countries of western Europe, and particularly France, were awash with surpluses. They had overcome the immediate post-war difficulties and benefited from the explosion in agricultural productivity that took place in the late forties and early fifties.

In France, this productivity had been fuelled by massive state subsidies which, in insulating farmers from the realities of the market, meant that by 1961 – just before the CAP was to start coming into force – the farming population still accounted for 25 percent of all her employment, against only four percent in the United Kingdom.

As the surpluses grew, they had led to persistent downward pressures on prices, which in turn threatened the economic viability of the mass of French farms, many of them small, inefficient peasant holdings. And herein lies the true genesis of the CAP.

For France's politicians, this presented a nightmare: the thought of millions of small farmers being displaced from the land and gravitating to towns and cities which could offer them neither jobs nor housing.

The fear was that they would lose their naturally conservative political allegiances and become a fertile breeding ground for discontent. In a country where the Communist Party was the largest single political grouping, the spectre of the Communists sweeping to power on the votes of dispossessed agrarian workers was of very great concern. Even armed revolution could not be ruled out. In France's highly unstable political structure, it was vital to the very survival of the state that the farmers and their families should be kept on the land.

To that effect, the then Fourth Republic had no option but to spend ever-increasing sums on farm subsidies, to the point where this expenditure threatened to bankrupt the state.

Yet the subsidies themselves only exacerbated the problem. They drew into production marginal land, while increased income encouraged investment in machinery. In 1950, the number of tractors in the Six as a whole had stood at only 370,000. By 1962 the number had grown to 2,300,000. Wheat production in the mid-1950s increased eight-fold. Sugar and wine production rose by over 300 percent. This necessitated ever-larger government-funded stockpiles and export subsidies.

By the early 1960s production was still increasing at a rate of 20 percent per annum. Eleven million of the 24 million dairy cows in the Six were French, each producing less than a quarter of the milk yield of Dutch animals. Dairy subsidies alone were costing the French taxpayer 1.35 billion francs (equivalent to £3 billion a year at 2003 prices), of which 70 million were used to dump powdered milk on the Indian and Mexican markets. Huge further sums were spent on storage and processing, while the surplus "butter mountain" stood at 200,000 tons. French farm policy was clearly unsustainable. Politically, however, it was essential. 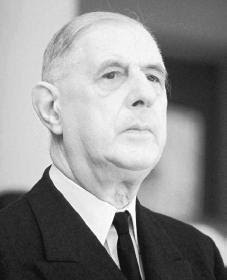 So it was that, when de Gaulle took power in 1958, France's farm surpluses had already reached crisis point. Attempts to reform the subsidy system had met with stiff opposition, which presented a dangerous threat to his electoral base. De Gaulle was being forced to continue payments on a scale the French government could simply no longer afford.

At a crisis Cabinet meeting in August 1962, with the Algerian crisis now largely over, he was to call the "stabilisation" of agriculture the "most important problem" facing France. If the problems are not resolved, de Gaulle declared, "we will have another Algeria on our own soil".

De Gaulle and his advisers realised there were only two possible remedies: to find new export markets, or an additional source of finance for the subsidies. The answer to both might lie in the EEC.

What had become vital, they concluded, was to use it to set up an agricultural policy which could give French farmers access both to external markets and also to additional funding, primarily from Germany.

But it was vital that such a policy should be framed above all to meet the needs of France. Thus, despite his overt dislike of supranational institutions, de Gaulle came to regard the EEC as the most essential instrument in furthering France's national interest, the main aim being to put in place the Common Agricultural Policy.

As we can see, the CAP became not an instrument to promote the production of food or solve food shortages. It was first and foremost a mechanism to finance the surpluses and to manage the retreat from the land, brought about by the huge gains in agricultural productivity. More fundamentally, it ended up as being a means by which first German and then UK taxpayers paid for the transformation of French agriculture.

Of course, all this – and more - is in The Great Deception by Booker and myself. If Hannan wasn't so important, he might have time to read it, and could even learn something. He might then avoid getting it wrong so often.