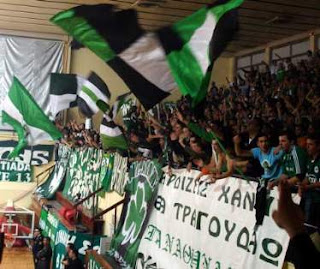 What with one thing and another, we do not seem to report news from Greece as often as we should. Let me, therefore, make amends.

First off there is the news that the Greek government has banned all team game matches for 15 days. Trouble broke out yesterday before the projected women’s volleyball match between Olympiakos and Panathinaikos the country’s two largest teams. The police, it appears, had not been aware of the massing of fans in Peania.

One fan was stabbed and run over by a car, at least six people were injured, one of whom was in critical condition, and police made 13 arrests following the 20-minute battle.

Among those injured were bystanders as well as several minor soccer league players on their way to training. Their team logo and colors resembled those of Panathinaikos.

According to the report there had been problems between the two sports clubs before:

Clashes among supporters of the two teams date back decades. The most recent death of a spectator in Greece, in 1995, was after clashes between Olympiakos and Panathinaikos fans during a basketball match.

One can’t help feeling that the Greeks take sport perhaps just a tiny bit too seriously.

The European Commission on Friday formally endorsed Greece's plan for how it will spend EU aid, opening the door for Athens to receive EU payments of €20 billion (US$26.6 billion) over the next seven years.

Greece is the second country, after Malta, to have its National Strategic Reference Framework for 2007 to 2013 accepted by the European Commission. We can forget that nonsense in the article about it being accepted by the 27-member Union. Nobody but the relevant Commissioners, Danuta Hübner, Commissar for Regional Policy and Vladimir Špidla, in charge of Social Affairs and Equal Opportunities, and their staff even know that €20 billion of our money has been earmarked for the Greek economy.

The Greek strategy, we are told, “shows a strong commitment to promote the quality and the intensity of investments in human resources”. The priorities, outlined in the NSRF will be translated into 13 operational programmes, five of them regional and eight thematic, with an additional programme on technical assistance.

In the last quarter of 2006, unemployment in Greece dropped to 8.8 per cent as compared to 9.7 per cent in the same period of 2005. This is still substantially higher than unemployment across the EU and in the Eurozone. At 25.5 per cent Greece still has the highest (together with Poland) unemployment rate among the under 25s. (I wonder why we see no Greek plumbers or builders or waiters in this country.)

The Heritage Foundation Index for Freedom 2007 lists Greece very low among European countries. Its regional ranking is 36, just below Poland and above Croatia, with world ranking 94. It scores low on most signifiers, but particularly on financial freedom, freedom from corruption and labour freedom, all essential matters if a country wants to develop economically, not simply hold its hand out for more aid from other taxpayers in the European Union.