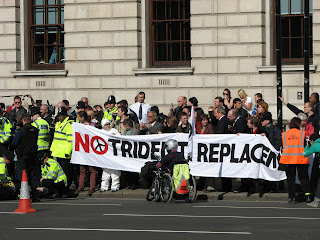 Jolly japes in Parliament Square this morning as the yoghurt knitters express their disapproval of the Trident replacement programme, the subject of a vote in the Commons today.

For a very brief period, they managed to close the square to traffic, as protestors shackled themselves to long cylinders representing the missiles, with supporters standing by with the obligatory banners. 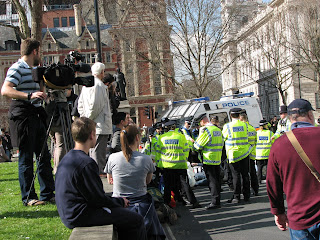 The vote is expected this evening and, by all accounts, will be a close run thing as upwards of 60 Labour MPs rebel.

The government, therefore, expects to be bailed our by Cameron's Tories, the Conservative Party having traditionally supported the nuclear deterrent. For this at least we can be grateful - that some of the Tory values have actually survived. 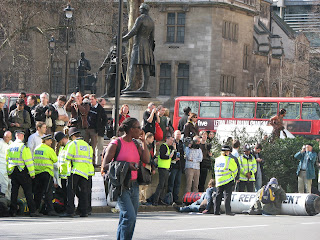 Nevertheless, this has not prevented demonstrations being staged all over the country, and especially in Faslane, Scotland, where the missile submarines will continue to be based. For the majority of people though, there is simply no argument. Who, after all, wants to live in a world where North Korea and possibly Iran have nuclear weapons, where India and Pakistan are nuclear powers, and we are not? 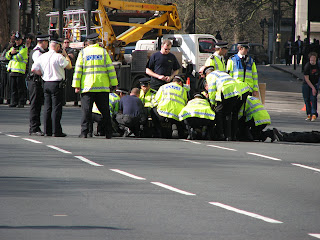 The ultimate joke, however, is that our independent nuclear deterrent is very far from being independent. Although we have design authority of our own warheards, with the sell-off of the Royal Ordnance explosives factory in Bridgewater, Somerset, the conventional explosives required will now be made in France. Our future, therefore, lies as much in the hands of M. Sarkozy or Madame Royal as it does our own Parliament.