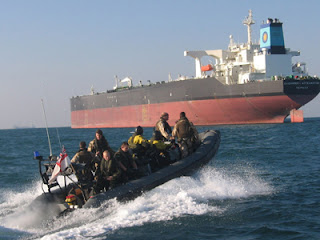 News is coming in of an abduction by Iranian revolutionary guards of two Royal Navy boarding parties – 15 men in all - from the frigate HMS Cornwall.

According to the MoD website, the incident took place at approximately 1030 Iraqi time.

The British personnel were engaged in routine boarding operations of merchant shipping in Iraqi territorial waters in support of UNSCR 1723 and the government of Iraq. The UK boarding party had completed a successful inspection of a merchant ship when they and their two boats were surrounded and escorted by Iranian vessels into Iranian territorial waters. 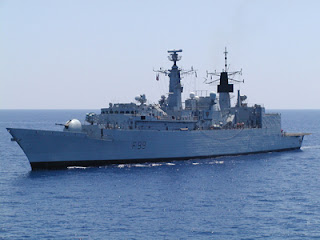 The MoD says it is "urgently pursuing" the matter with the Iranian authorities at the highest level and on the instructions of the Foreign Secretary, the Iranian ambassador has been summoned to the Foreign Office. "The British Government is demanding the immediate and safe return of our people and equipment."

In 2004, Iran detained eight British servicemen for three days after they allegedly strayed over the maritime border. The UK claimed the men were "forcibly escorted" into Iranian territorial waters. And, although the men were returned, the equipment was not.

Email ThisBlogThis!Share to TwitterShare to FacebookShare to Pinterest
Labels: Iran