This does not compute 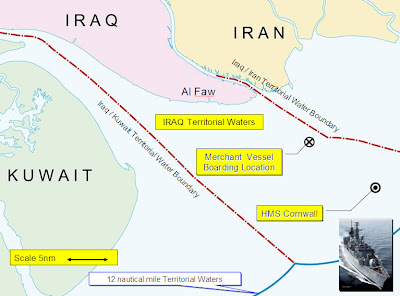 We have now an account of the Iranian abduction of our sailors and marines. According to Vice Admiral Charles Style, Deputy Chief of the Defence Staff, briefing on the MoD website, the events were as follows:

Our boarding started at 0739 local time and was completed at 0910 with the merchant vessel having been cleared to continue with her business. Communications were lost with the boarding team as the boarding was finishing … at 0910. HMS CORNWALL's Lynx helicopter, which had been covering the initial stages of the boarding, immediately returned to the scene to locate the boarding team.

The helicopter reported that the two seaboats were being escorted by Iranian Islamic Republican Guard Navy vessels towards the Shatt 'Al Arab Waterway and were now inside Iranian territorial waters. Debriefing of the helicopter crew and a conversation with the master of the merchant ship both indicate that the boarding team were ambushed while disembarking from the merchant vessel.

Now, with reference to the chart provided (above), using the measurements supplied by the MoD, the mother ship, HMS Cornwall is about 8.5 nautical miles from the boarding party - to the south east. Why wasn't she between the boarding party and the Iranian border?

Then, her top (flank) speed is 30 knots, but she takes a little time to work up to that so, on that basis, it will take her up to 20 minutes to get to the scene. 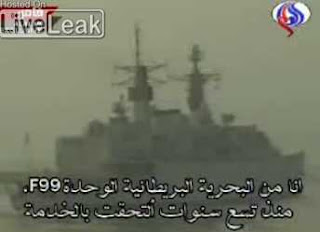 But, it would appear, the Cornwall does not immediately set out. All we are told is that, when communications are lost, the helicopter is "immediately" despatched and reports the British boats under escort, already in Iranian waters.

Now, it can only take the Lynx a couple of minutes to get to the scene. And the British boats are already over the border. They have travelled around two nautical miles to get there – faster than the Lynx can get to the scene, even though it left "immediately"?

Then we see the Iranian film. One scene is missing from the BBC rendition , a very short sequence with a "grab" shown above right. This shows a close up of HMS Cornwall. But it is Iranian film.