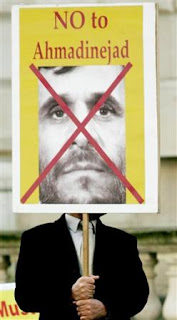 Given very little coverage by the MSM, yesterday a small demonstration was mounted by the National Council of Resistance of Iran outside the Foreign and Commonwealth Office in London. The demonstrators were calling on Britain to obey a ruling of the European Court of Justice to remove People's Mujahdeen Organisation of Iran from the official EU terror list.

Before this had been framed against the growing crisis of the service personnel abducted by the Iranian Revolutionary Guard, the background had been set out by Christopher Booker just over a week ago when he described the eagerness of our government to flout EU law in order to appease the dictatorial regime in Iran.

In March 2001 Jack Straw, then Home Secretary, placed on the list of terrorist organisations, under the Anti-Terrorism Act, the leading Iranian dissident organisation, the People's Muhajedeen of Iran (PMOI), even though the PMOI claims to be opposed to terrorism in any way and wishes only to carry on its campaign for freedom and democracy in Iran in a peaceful fashion. Mr Straw last year admitted to the BBC that he had done this at the behest of the Teheran regime.

Later that year, after 9/11, the EU drew up its own list of proscribed organisations and individuals linked to terrorism, and in May 2002, at the UK's behest, the PMOI was added to the list. With its assets thus frozen and its activities drastically circumscribed, the PMOI petitioned the European Court of Justice that the EU Council of Ministers had acted improperly, on a whole range of grounds.

In February 2003 the UK Government became the only EU state to join the case as a third party. Last December, the ECJ found in the PMOI's favour, ruling that it had never been given a fair hearing and that its name should never have been put on the list of terrorist organisations. Nevertheless, in January, again on the UK Government's insistence, the Council of Ministers told the PMOI that, regardless of the court’s ruling, its name would remain on the list.

The deadline for any appeal against the judgement has now passed. In its zeal to appease one of the most ruthless and dangerous regimes in the world, Booker wrote, the British government has thus persuaded its "partner" simply to put up two very large fingers to EU law.

The story has been told in more detail here, with author Joseph Omidvar accusing the EU of being "hell-bent on pursuing the threadbare policy of appeasing Tehran". He then observed that "the mullahs are always ready to exploit all these signs of craven weakness." 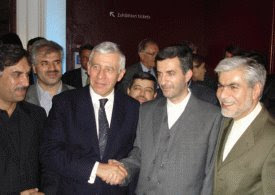 Despite Jack Straw's attempts as foreign secretary to cosy up to the monster, no more does this apply than to the government and the current situation.

From a strong piece in Hot Air it appears that a British boarding party was involved in a tense stand off against the Iranian Revolutionary Guard navy in December 2004, when they were surrounded by Guards in armed patrol boats. The impasse was only resolved when the British sailors were lifted by helicopter off the merchant ship they had boarded, where they had taken refuge.

MPs are now asking the government whether there were any other such incidents, as it begins to look like the 15 sailors and marines abducted last week were specifically targeted by the Iranians because of previously weak responses by the British and the evident vulnerability of their patrols.

You would have thought that the British government, more than most, would have understood the perils of appeasement but, it seems, the lessons of Munich, all those years ago, have been forgotten. It was Winston Churchill who observed in this context that, "An appeaser is one who feeds a crocodile, hoping it will eat him last." But, after years of appeasing the mullahs, it is 15 British servicemen who have ended up feeding the crocodile.