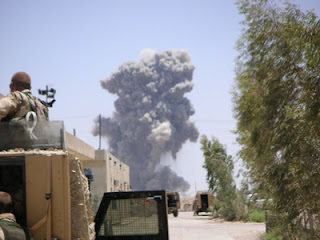 Attacks on the Basra Palace base are intensifying, says the Radio 4 BBC Today programme, which this morning ran a short piece on how the Army is coping. Soldiers, we are told, are routinely getting only three or four hours sleep a night, as they are exposed to incessant mortaring.

Despite this, a young Army officer interviewed claimed that the Army is "getting the upper hand" and "has the ability to track and defeat this enemy".

The piece follows this officer and his troops, who form the "Quick Reaction Force", chasing down the attackers … in Warrior mechanised infantry combat vehicles. Predictably, by the time they arrive at the co-ordinates from which an attack had been mounted, there was no sign of the enemy, although the piece recorded that, on this occasion, the patrol was ambushed and a gunfight erupted.

As is so often the case, the report was superficial. The previous night, a patrol had captured a car in which rockets and bombs had been found, but we were not told how this came about. But no insurgents were captured or killed.

Once again, therefore, we seem to be in the same situation that frustrated the ground patrols at the Abu Naji base in al Amarah, before it was abandoned because of the incessant attacks (the picture above shows the effects of one). By the time they arrived, the insurgents had long gone, hence the need for a helicopter response – which we know was occasionally provided by the United States.

Why this resource is not available remains one of those modern-day mysteries, compounded in this event by another. The patrol described by the Today programme, arriving at the scene, did not appear to know the whereabouts of the mortar crew which had mounted the attacked. Yet, as we discussed in our earlier piece, the technology exists to pinpoint and follow attackers, using advanced electro-optical equipment fitted to fixed-wing aircraft and helicopters.

Here the mystery deepens. Despite my comments about the lack of equipment and the failure to learn from Northern Ireland, it seems the Army was well able to learn the lessons.

As the picture and narrative above shows, in December 2003, three Britten Norman Defender aircraft were ordered for use in Basra - each equipped with the formidable electro-optical equipment which has been so successful in tracking insurgents - the first aircraft entering service with the Army on 1 October 2004 - just 9½ months later.

It also appears that these aircraft were available in al Amarah. We also know that the base there was equipped with Mamba counter-battery radar, which means that some of the key elements needed to deal with the mortar threat were in place.

What appears to have been missing were the helicopters to convey troops rapidly to the scene, and an effective patrol strategy. 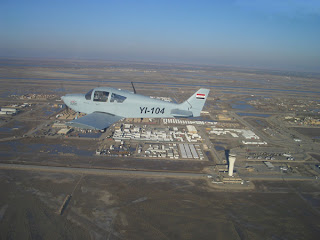 This notwithstanding, currently, there are no indications that the Defenders are still in use. There is no reference to them on the Army Air Corps website, they do not appear on the main MoD site and no official photographs seem to have been published. And, even if they were still in use, three aircraft are not enough to mount 24/7 standing patrols covering all the British bases. This might explain why we are resorting to using the Iraqi Sama aircraft (the model here seen over Basra air base).

Operational security is one thing but, on the face of it, it would appear that the lack of information on our capabilities is aimed more at concealing inadequacies than protecting our troops. And, despite having its reporter on the ground, the BBC did not even seem to notice.