The price of betrayal 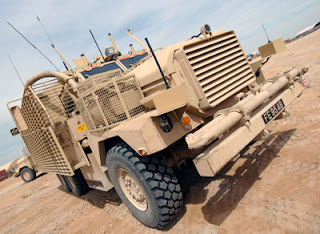 What an extraordinary contrast we have in the treatment of British and US troops in Iraq. On the one hand, we have the US government taking force protection seriously, and then we have the British secretary of state for defence, Des Browne.

He announced an order of "around" 100 the vehicles illustrated left, then known as Cougars, but since renamed as Mastiff “protected patrol vehicles”. That was on 25 July 2006, when he also promised that there would be “an effective capability in place” in Iraq by the end of that year.

One example of the Mastiff was being paraded on Salisbury Plain last September but, by January it seemed as if only four were in place – although more were quickly to follow and we saw them in action ten days ago when the Duke of York met members of the 1st Battalion The Yorkshire Regiment in Basra

Now, procurement minister Lord Drayson has turned up in Iraq to give the delivery of the Mastiffs the official seal of approval and to claim credit for their purchase, which is a bit rich considering that he fought tooth and nail to avoid buying them. 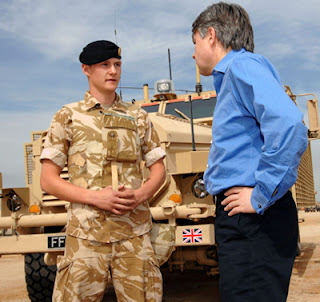 Nevertheless, the vehicles have recently started to be used on patrol and Mastiff Company Commander, Major Dan Bradbury, 1st Yorkshire Regiment, readily declares that "The soldiers love it. It's a real investment in their protection." Driver, Private Ciaran Castles, adds: "All round it's a good bit of kit. It's enjoyable to go out there because you feel more safe and you know if it comes down to it, you've got that extra armour to protect you."

Only now, however, does it appear that the MoD is ordering the full number, with Force Protection (the makers of the Mastiff) announcing yesterday a “contract modification” from the MoD for 22 additional vehicles. The order, it says, will bring the total number of vehicles produced for the British government to 108 at an approximate value of $70.1 million.

By contrast, the US government is to order 6,738 of this type of vehicle, preparatory to replacing every Humvee carrying out a tactical role. This, as we reported earlier (and here), represented a real commitment to winning the war in Iraq.

Now, also, we can see the price the government is prepared to pay. It is proposing cuts to several aviation projects, including reducing the number of F/A-18G Growler electronic warfare aircraft it will buy, all to fund $1.2 billion for the Army's MRAP vehicles and the $250 million for Marine Corps

And there is the real contrast between the US and the UK. There is limited scope for cross-service transfers in the UK so that any re-equipment on a scale equivalent to that proposed for US ground forces will have to come out of the Army's equipment budget. There lies the Holy Grail, by the name of FRES, and despite signs to the contrary in February, it like the Army brass might have won the day.

Responding to a question from MP Mike Hancock on the future of Fres, Adam Ingram responded yesterday thus:

The Department reviewed the future rapid effect system (FRES) programme in 2006 to take account of our experience on operations in Iraq and Afghanistan and in the light of recent developments in vehicle technology and protection systems. This review aimed to ensure we deliver the best possible vehicles able to meet the operational needs of the British Army through life.

… This review was completed last year. The procurement strategy has now been announced and we are now making rapid progress on the FRES programme with candidate vehicle designs undergoing proving trials this summer and the winning vehicle(s) selected by November 2007 to proceed to the next stage. It is essential to carry out this detailed assessment of the candidate vehicle designs and to drive out programme risk before the major investment decision is taken.

So we have £14 billion to buy toys for the Generals, while the troops in the field get $70.1 million for the kit needed to save their lives.

Meanwhile, the man who did so much to ensure that FRES survived, General Sir Mike Jackson is reported to have been paid close to £900,000 for his memoirs, due to be published in September. It looks like betrayal is a little better rewarded these days.