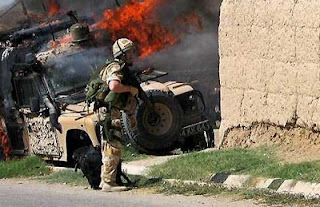 By another coincidence, both Christopher Booker and Simon Jenkins deal with the same issue in their respective columns, two minds with but a single thought. Actually, that is not quite true, and there is also a major difference: Booker gets 300 words against nearly 1500 from Jenkins.

Jenkins's title is quite encouraging: "Soldiers are dying while we blow billions on weapons they don't need". But that is as good as it gets. By way of his substantive thesis, he asserts that one of the perils of being a soldier these days is that "your ministry leaves you underequipped because it is still buying ships to fight the Germans and planes to fight the Russians." Furthermore, if you strip away the polemic, Jenkins actually says very little more than that.

To support his thesis, he characterises "modern wars" as fourth generation warfare, arguing that the one service that fights these is the Army. Yet, he declares, it is the Army that constantly loses out in Whitehall battles over money. Defence ministries spend billions on weapons that have no relevance to the wars that modern soldiers are expected to fight – they are stuck in the cold war, spending billions on "cold war equipment programmes".

Jenkins does have a point, and we applaud him for making it, but he develops it poorly, but then gets his conclusions hopelessly wrong.

For sure, he picks up on an issue we have raised, the new batch of "archaic destroyers" the Type 45, but his eye is on aircraft carriers and the Eurofighter, rather than the detail of defence procurement. Thus, he asserts that "weak Labour defence secretaries" are being browbeaten into buying kit for the Navy and the RAF while the Army goes short.

"Glib pundits," he then concludes, "may state that the nation 'needs' both more army manpower and more expensive ships and planes." But, declares Jenkins, "the truth is this cannot be afforded." As a result, he opines, "What gets sacrificed is the manpower. Because there is no profit in soldiers, the nation gets planes and ships it does not need. The defence ministry fights, or rather buys, the last war and ignores the next."

Without spending too much time on this, one can certainly agree that the Eurofighter is a Cold War project, but we are committed to it and there is little that can be done (other than cancelling Tranche 3). The case against aircraft carriers is weak – as a means of projecting power, they cannot be said to be a Cold War instrument.

But, as to the MoD fighting the last war and ignoring the next, it is our view that the problem is that it is planning for the next and ignoring those which we are currently fighting.

To come to that conclusion, one has to understand the concept of FRES and how it fits into the grand scheme of things – which Jenkins clearly does not. But, if you do factor it into the balance, one sees the RAF getting approximately £20 billion for its Eurofighters, the Royal Navy £14 billion for its carriers and the JSFs to arm it, and the Army gets £14 billion for FRES. Seen that way, the Army is not actually doing that badly.

Thus, it is Booker, with his mere 300 worlds, who pinpoints the problem far better than Jenkins does - in a fifth of the length.

His piece draws from ours on the evidence of Air Chief Marshal Sir Jock Stirrup, Chief of the Defence Staff, to the Defence Committee, from our piece about the differences between the standards of base protection in Afghanistan and Iraq, and the astonishing way we are increasingly reliant on our allies for support, and from our account of the better value for money they get when buying their kit.

Headed, "Sir Jock's 'locker' has not much in it but skeletons", Booker thus tells us how the MoD website boasts of how well-protected our personnel on Kandahar air base are from Taliban mortar and rocket attack, thanks to the Americans, to Romanian troops deploying the latest surveillance equipment, and to Danish weapon-locating radar.

He adds that the MoD naturally publishes few details, however, of how woefully unprotected and ill-equipped our troops are in Iraq, who are now having to rely on support from Canadian-designed reconnaissance aircraft, supplied to Iraq by Jordan and stationed on our Basra air base.

In contrast to our own dire lack of small helicopters, both in Iraq and Afghanistan, the Iraqis themselves will soon have more than 50 of them, including 16 Hueys, refitted in the US with the latest equipment at less than £2 million each. Meanwhile the MoD in London is still focused on its plans to buy a fleet of Super Lynxes, costing £14 million each, which will not be available for at least five years.

Sir Jock Stirrup, the Chief of the Defence Staff, last week admitted to the Commons defence committee that, so far as Iraq and Afghanistan were concerned, we have "not much left in the locker", and that "we are not going to be in the business of engaging in large-scale, high-end fighting operations for some years to come".

In plain English, it seems, the MoD top brass are still so busy dreaming of those "high-end" wars our forces might possibly have to fight one day in the distant future that, unlike our allies, they have "nothing left in the locker" to equip our troops to fight the wars in which they are actually engaged (and dying) now.

Now, if we could get Jenkins to read Booker, or even our web site – especially this - then we might possibly make some progress.