German judge does not come through 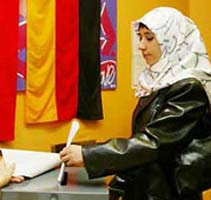 Christina Datz-Winter, a German divorce judge has roused anger in the country by her strange ruling that a man may go on beating his wife if she tries to lead a Western style life, if the couple originate from Morocco.

To be fair, there has been a serious upsurge of anger in Germany, led, in the first place by Barbara Becker-Rojczyk, the woman’s defence lawyer. When in January the judge pronounced that there were no grounds for a speedy divorce, despite evidence of violence and threats of murder on the part of the husband, the outraged lawyer and her client demanded that the judge cease to make decisions on such matters as there was a clear clash of interests:

They felt that, because of the point of view presented by the judge, she was unable to reach an objective verdict. In the reply sent to Becker-Rojczyk, the judge expressly referred to a Koran verse -- or sura -- which indicates that a man's honor is injured when his wife behaves in an unchaste manner. "Apparently the judge deems it unchaste when my client adapts a Western lifestyle," Becker-Rojczyk said.

As the judge was still on the bench on Tuesday, Ms Becker-Rojczyk has decided to go public on the case. On Wednesday, the court in Frankfurt abruptly removed Ms Datz-Winter.

The article in International Herald Tribune has comments from various people.

"A judge in Germany has to refer to the constitutional law, which says that human rights are not to be violated," said Günter Meyer, director of the Center for Research on the Arab World at the University of Mainz. "It's not her task to interpret the Koran. It was an attempt at multicultural understanding, but in completely the wrong context."

True enough but is it not extraordinary that “multicultural understanding” seems not to involve an understanding how a woman subjected to violence might feel?

"When the Koran is put above the German Constitution, I can only say, 'Good night, Germany,'" Ronald Pofalla, general secretary of the Christian Democratic Union, said to the mass- market newspaper Bild.

Dieter Wiefelspütz, a Social Democratic member of Parliament, said in an interview that he could not recall a court ruling in years that had aroused so much indignation.

Could this case precipitate that much-needed understanding that a German national identity, one that includes an understanding of the country’s laws, constitution and numerous enlightened traditions [oh yes, there are, for those members of the forum who have never heard of, say, Goethe].

Apparently German Muslim leaders are not happy either. Statements have been made to the effect that Muslims in Germany must obey German law and to the effect that the Koran was being misunderstood. It seems, according to the article that “mainstream Muslims have long rejected wife- beating as a relic of the medieval age”.

Let us hope that is true. Who knows what else they might reject as being relics of the medieval age.