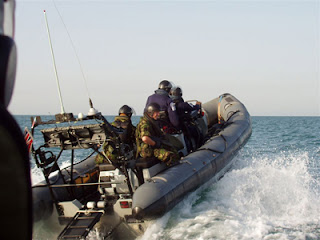 With Google currently running over 2,200 stories on the abduction of the British marines and sailors from Iraqi waters by Iranian forces, compared with only just over 500 on the EU's weekend anniversary bash, the figures tell their own story.

Equally significant is the fact that the only public statement to come from our prime minister while attending the bash was a comment on the detention of the sailors and marines, Blair declaring that it was "unjustified and wrong".

Once again this is a salutary demonstration of how Britain’s standing in the world so often seems far more affected by events and actions which are totally unrelated to the EU and, in this case, not for the better. While we are spending a King's ransom on our subscription to the EU – devoted in part to increasing our global influence – we might therefore be better advised to spend our money where it really matters.

Whether there were any deficiencies in our Iraqi operation remain to be seen but there must surely be an inquiry, once our servicemen are safely recovered, to determine whether indeed there were failures.

Not least, there needs to be an examination of the truth behind the story in The Sunday Telegraph, which alleges that British Intelligence chiefs were warned in January to expect reprisal attacks from Iran after America detained five suspected Iranian intelligence officers in Iraq. According to this newspaper, although the CIA alert led to the United States raising its official security threat level throughout the Middle East and elsewhere, Britain did not follow suit. 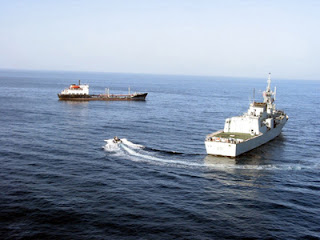 What has been exercising us, however – and we are far from being alone in this – is how a reported six Iranian vessels had managed to sneak up on the British craft, and why HMS Cornwall did not intervene.

Such a response was triggered by the classic boarding scenario, where the warship stands off but a short distance from the intercepted vessel – illustrated here with HMCS Vancouver (photo Canadian DND). A small boat is then detached, and the warship stays close, throughout the boarding, protecting the away team. 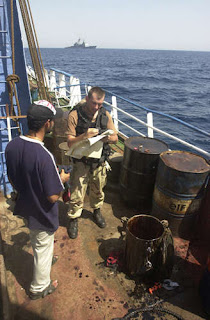 Clearly, this was not the case in this instance. HMS Cornwall may have been many miles away, acting more as a depot/command post than a guard ship, running several patrols from its location. Similarly, while its Lynx helicopter was available, it too seems not to have been covering the abducted boarding party. Yet, we see other pictures of the "classic scenario", this one (left) showing US personnel aboard a tanker with an Aegis class destroyer in the background, standing guard.

With only one frigate (and two minesweepers) in theatre, however, the Royal Navy must be hard pressed to back up all its small boat patrols, or this may simply be a case of (false) economy, the ship saving on fuel by not sailing. On the other hand, it could be carelessness, complacency or even incompetence – the latter hardly being a stranger to the military.

Either way, as Private Eye often puts it, I think we should be told.