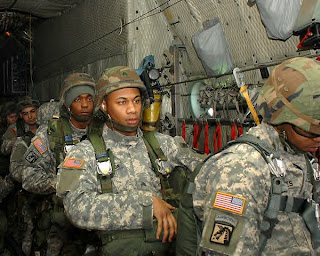 We have noted in the past that the European (and that includes British, in this case) anti-American posturing reminds us of nothing so much as adolescents displaying defiance of and contempt for their parents in the certain knowledge that in the case of any real trouble, those contemptible parents will be there to give aid and support.

The real enemy, on the other hand, have no such intention, so it is best not to annoy them. Curiously enough, this ridiculous attitude is now so prevalent that those who display it do not even recognize their own stupidity. They will, undoubtedly, be the first to scream for help if the Americans do, finally, turn their backs on Europe (with the exception of the odd East European country) and Britain.

We can all cite myriads of examples both on a personal and public level. I recall talking to a highly educated lawyer friend soon after 9/11 who was wistfully hoping that President Bush was looking at the rather beautiful moon, as we were (unlikely, given the time difference, but let that pass) and was imbibing peaceful ideas, which he badly needed, being a well-known warmonger. I pointed out that flying aeroplanes full of people into buildings on another country’s territory and killing several thousand in the process was, by any definition, an act of war. Oh yes, she moaned, but I still think … She trailed off.

At the time it was still not done (except on the BBC’s “Any Questions” – remember the treatment meted out to the American ambassador just days after 9/11?) to blame the United States directly for all the ills in the world. That came soon afterwards.

We have now reached a stage when a very large proportion of the population, egged on by the media and the political classes in Britain and on the Continent, do actually believe that the United States is a greater menace to peace than any other country; that it is more oppressive than any other country; and that its democratically elected leader is a bloodthirsty tyrant unlike say the peace loving and fairly elected leaders of Iran, Syria, North Korea or Cuba.

One of the commenters on Biased BBC refers to an extraordinary exchange about the British sailors and marines in Iranian hands during a PM programme. The gist of it seems to be that an interviewee happily gets away with saying that we have to be so very careful of what we do because of the way the Americans are behaving at the moment.

This is rather vague as a description, with the writer relying on memory but sounds remarkably accurate.

Still, things are worse in Germany. Through Captain’s Quarters I found an interesting article in Der Spiegel about German anti-Americanism. The author, Claus Christian Malzahn starts his analysis with the not-so-very-surprising information that, according to recent polls, 48 per cent of Germans think that the United States is more dangerous than Iran, rising to 57 per cent among 18 to 29 year olds, with only 31 per cent across the whole population believing the opposite.

Presumably, much of that argument is based on that curious assumption that Iran has never actually attacked anyone. Well, give or take a few terrorist groups that they fund, arm and train, I suppose they merely threaten Israel with annihilation and, of course, seriously oppress their own people. Oh yes, there is that rather curious presence in Iraq and, well, they do seem to have kidnapped 15 British sailors and marines. But hey, who is counting?

Mr Malzahn blames the German political establishment, who will, in his opinion, shed crocodile tears at this unfriendly attitude towards the country’s great ally.

The German political establishment, which will no doubt loudly lament the result of the poll, is largely responsible for this wave of anti-Americanism. For years the country's foreign ministers fed the Germans the fairy tale of what they called a "critical dialogue" between Europe and Iran. It went something like this: If we are nice to the ayatollahs, cuddle up to them a bit and occasionally wag our fingers at them when they've been naughty, they'll stop condemning their women to death for "unchaste behavior" and they'll stop building the atom bomb.

That plan failed at some point -- an outcome, incidentally, that Washington had long anticipated. Iran continues to work away unhindered on its nuclear program, and President Mahmoud Ahmadinejad reacts to UN demands with an ostentatious show of ignorance. The UN gets upset and drafts a resolution.

Another item on the Iranian president's wish list is the annihilation of Israel. But that will take a bit longer. In the meantime, just to make sure it doesn't get out of practice, the regime had 15 British soldiers kidnapped a few days ago. But it's still all the Americans' fault -- that much is obvious.

He then goes through the various “reasons” why Germans dislike Americans, knowing them so well through all those holidays they spend there. Much of it, of course, applies to other Europeans and the British as well. How many people know exactly what Americans are like (too materialistic and too religious, too obese and too obsessed with keeping fit, too aggressive and too apologetic all at the same time) after a visit or two to Florida or California?

Germany, in Mr Malzahn’s opinion, has special reasons for hating the Americans:

Worst of all, the Americans won the war in 1945. (Well, with German help, of course -- from Einstein and his ilk.) There are some Germans who will never forgive the Americans for VE Day, when they defeated Hitler. After all, Nazism was just an accident, whereas Americans are inherently evil. Just look at President Bush, the man who, as some of SPIEGEL ONLINE's readers steadfastly believe, "is worse than Hitler." Now that gives us a chance to kill two birds with one stone. If Bush is the new Hitler, then we Germans have finally unloaded the Führer on to someone else.

The Germans are not alone in this belief. How often do we hear about the incipient fascism and tyranny of the United States? Yet, it is a country that has never come even near to having either a fascist or a communist dictatorship. How many self-righteous Europeans can say the same thing about their own homeland?

The point is, of course, that there will be no consequences of these constant attacks on America and Americans, whereas the situation with Iran and other countries of that ilk is very different. You might find yourself under serious threats, some of which may be carried out.

Your “parents”, on the other hand, are never really going to let you down. Or are they? Will they finally get tired of this adolescent tantrum throwing?

This is what Ed Morrissey of Captain’s Quarters suggests, having made it clear that he does not think America never makes mistakes in its foreign policy. It makes plenty, as do all countries.

Perhaps the Germans would get a better appreciation for security issues if they shouldered more of the burden for them. It's time to close down the relics of the Cold War in Germany, and locate our military forces in nations more amenable to America. Poland would probably have some interest in hosting American bases, and they would have more strategic location in this era than Germany. Let the Germans have their space from the warmongering Americans and pay for their own national security. We do not need to stay where we are not wanted or appreciated.

He is not alone in voicing these opinions. There is, indeed, little logic to keeping American or, for that matter, British troops in Germany. But if the west Europeans are so anxious to be rid of those incredibly dangerous Americans, their wish may well be fulfilled. The unthinkable might happen and the adolescents may well find that their threats to leave home are suddenly taken seriously.