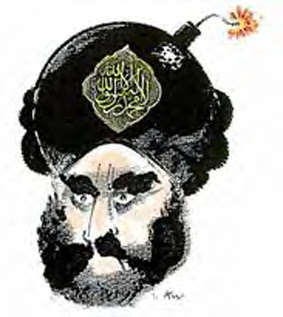 Well, I suppose this is really not quite the done thing but one cannot help sympathizing with the woman in question.

As Expatica reports, the widow of one of the victims of the Madrid bombs attended the trial wearing a white t-shirt with the Mohammed cartoon on the front.

She sat among the audience for a while, then walked up to the glass enclosure where the accused were and stood in front of them for a while, subsequently leaving the court.

There was some confusion for a while as the presiding judge was not sure whether she was a relative of one of the accused and whether there was a message on the shirt for anybody. Well, of course, there was but it was not a message the accused wanted to see.

Filming of the trial was stopped briefly and the judge sent to find out the woman's identity. Having satisfied himself that she was not in cahoots with the accused, he announced that she was free to wear what she liked and the trial continued.