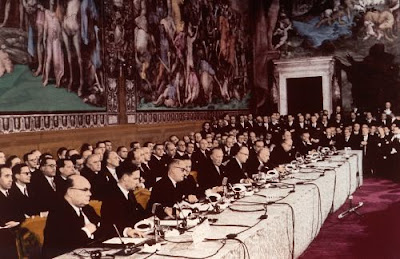 Variously from The Times (which claims an exclusive), the Telegraph and others, we have the unofficial text of the Berlin Declaration – as published by the Austrian Press Agency:

Europe for centuries was an idea, a hope of peace and understanding. That hope has been fulfilled. European unity has made it possible to live in peace and prosperity. It has created a sense of community and overcome differences. Every Member State has helped unite Europe and strengthen democracy and the rule of law. We have the love of freedom of the people of central and eastern Europe to thank that the unnatural divisions of Europe are finally overcome. European unity shows we have learned the lessons from our bloody conflicts and painful history. We live today together in a way that was never before possible. We citizens of the European Union are united in good fortune.

In the European Union, we are developing our common ideals: for us the individual is central. His dignity is inviolable. His rights are inalienable. Women and men have equal rights. We strive for peace and freedom, for democracy and the rule of law, for mutual respect and responsibility, for prosperity and security, for tolerance and participation, justice and solidarity. We live and function together in the European Union in a unique manner. This expresses itself in the democratic co-operation of member states and European institutions. The European Union is based on equal rights and solidarity. That is why it is possible to balance interests fairly between Member States. We uphold in the European Union the individuality and the diverse traditions of its members. The open frontiers and the vibrant diversity of languages, cultures and regions enrich us. Many goals cannot be achieved independently but only through common action. The European Union, the Member States and their regions and local communities share these tasks.

We face great challenges which cannot be contained within national borders. The European Union is our response to them. Only together can we preserve our European social model in the future for the benefit of all citizens in the European Union. This European model combines economic success and social responsibility. The common market and the euro make us strong.

That is how we can shape the increasing world-wide interdependency of the economy and ever expanding competition on international markets according to our values. Europe’s wealth lies in the knowledge and abilities of its people; this is the key to growth, employment and social cohesion. We will jointly fight terrorism and organised crime. We will also defend our freedom and civil rights against their enemies. Racism and xenophobia must never again be given their chance. We will act to ensure that conflicts in the world are solved peacefully and that people do not become victims of war, terrorism or violence.

The European Union will promote freedom and development in the world. We want to push back poverty, hunger and disease. In doing so, we will continue to play a leading role. In energy policy and protection of the climate we want to go forward together and make our contribution to heading off the global threat of climate change.

For we know that Europe is our common future.

While posting this, I heard on the BBC radio news, from a gentleman whose name I did not catch, that we British Eurosceptics had a "smug, grubby way of looking at things". If this declaration is the best the "colleagues" can do, then we are at least justified in being smug.