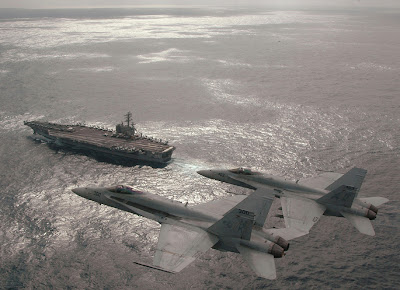 This should read "toys" – three for the price of one. The picture depicts US Navy Captains Craig Williams, front, and Richard Butler flying in F/A-18C Hornet aircraft over USS Ronald Reagan (CVN 76) on 1 March 2007, performing an aerial change of command ceremony while under way in the Pacific Ocean. Williams was relieved by Butler as commander of Carrier Air Wing Fourteen during the ceremony. Now that is style - bu**er the carbon footprint.

This is an official DoD photograph taken by Lt. Cmdr. Tam Pham, US Navy. Click to enlarge, or you can see the high resolution original here.