A foundation of lies 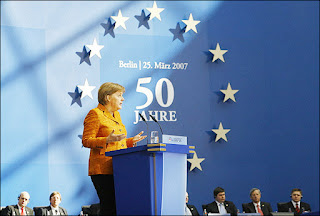 To the very last, the European Union has maintained its reputation for being built on a foundation of lies, this time from the mouth of Angela Merkel, delivering her speech in Berlin yesterday, prior to her signing the so-called Berlin Declaration.

Her opportunity came when she made clear the rejection by French and Dutch voters of the planned constitution would not stop the EU project. "It is true that anyone who hoped that 50 years after the Treaties of Rome we would have a Constitutional Treaty will be disappointed," she said. But a newly-agreed "Berlin Declaration" would get the project back on track - because the political shape of Europe had to be constantly renewed.