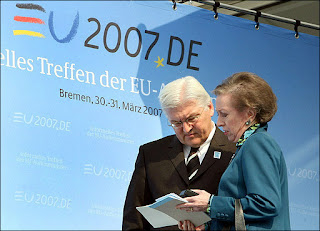 If taken at face value, the European Union has issued a robust statement. It came by way of a communiqué from the informal Foreign Affairs Council, meeting in the Park Hotel in Bremen, Germany. The full text is as follows:

The European Union deplores the continued arrest of 15 British citizens by Iran on 23rd of March and underlines the European Union’s unconditional support for the government of the United Kingdom.

All evidence clearly indicates that at the time of the seizure, the British Naval personnel were on a routine patrolling mission in Iraqi waters in accordance with United Nations Security Council Resolution 1723. The seizure by Iranian Forces therefore constitutes a clear breach of international law.

The European Union repeats its call for the immediate and unconditional release of the British Royal Naval personnel. The European Union furthermore calls on Iran to immediately inform the government of the United Kingdom about the whereabouts of the British Naval personnel and grant consular access. The fundamental rights of all prisoners in Iran must be scrupulously respected.

The EU Foreign Ministers requested the High Representative to present the EU position to the Iranian government. Should the UK citizens not be released in the near future, the EU will decide on appropriate measures.

This was agreed between Germany's foreign minister Frank-Walter Steinmeier, holding the EU presidency, and Britain's foreign secretary Margaret Beckett (pictured), and endorsed by all the other 25 member states.

The response from Iran was not long in coming. It told the EU not to interfere in the "dispute". I guess we will now find out what the EU means by "appropriate measures".

Uglanov tells us that the long awaited US military attack on Iran is now on track for the first week of April, specifically for 4am on 6 April - the Good Friday opening of Easter weekend. Code-named Operation Bite, about 20 targets are marked for bombing, with the list including uranium enrichment facilities, research centres, and laboratories. The attack will last twelve hours, from 4am until 4pm local time.

The EU had better get its skates on. It has seven days for "soft power" to save the world.